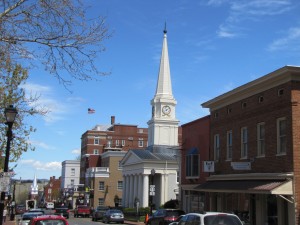 Nestled in the foothills of the Blue Ridge Mountains, the charming and historic Lexington, Va. is a friendly town that is proud of its heritage.  Named one of the “Best Small Towns to Visit” in 2013 by Smithsonian Magazine, the town offers shopping, eating, history, education and the outdoors, all within a short distance. The town is home to both Virginia Military Institute (est 1839) and Washington and Lee University (est 1749), each of which hosts museums open to the public. The VMI Museum, the first public museum in Virginia, has 15,000 artifacts, including a Revolutionary War musket, that help trace its heritage; W&L’s Lee Chapel & Museum is dedicated to the university’s history and how it is intertwined with both George Washington and its 11th president, Robert E. Lee.

Lee Chapel is a focal point on the campus and is where you will find what is possibly the first Peale portrait of George Washington. The lower level museum includes Lee’s office, and a changing exhibit as well as the main exhibit, Building and Rebuilding a Nation, which shows the contributions both George Washington and Lee made to education and reveals an interesting family connection between the men. The museum offers a glimpse of this Confederate general, and makes it apparent that he was faced with a very difficult choice: either fight for the North, against his family and neighbors, or fight for the South, against the nation he loved. It is also apparent that he was a true gentleman, taking defeat with grace and continuing to serve. The university owes their honor code and more to him.

In addition to the history found at these schools, the town is also home to the Lee House (now the residence of W&L president and their families), 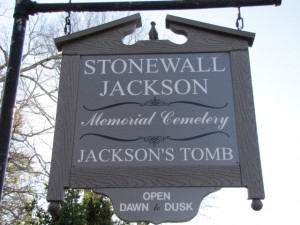 the Stonewall Jackson House and the George C. Marshal Museum. Many of the town’s

buildings date back to the 18th and 19th centuries. A few blocks away, the Stonewall Jackson Memorial Cemetery is the final resting place of the general, as well as many other Confederate veterans.

Named after Lexington, MA, the site of the first shot of the Revolutionary War, the town also has found an interesting way to share the history of her famous people, from George Washington (who endowed the university that now bears his name) to Meriwether Lewis to Patsy Cline. Pavers throughout town commemorate deceased people deemed to be “The Righteous and Rascals of Rockbridge County.” The related website offers biographical information and locations of related sites throughout the county.  Several movies have been filmed in and around Lexington, including Sommersby, Gods and Generals, War of the Worlds and Field of Lost Shoes.

Not far outside of town is Natural Bridge Park, which was once owned by Thomas Jefferson (and is rumored to have been surveyed by George Washington) and is on both the National and Virginia Historic Landmark lists as well as the National Register of Historic Places. This natural formation is where the county, Rockbridge, got its name. The main feature is a 215 foot natural limestone arch. Today a visit to the park includes not only the view of the bridge, but also admission to a number of trails and the Monacan Indian Living History exhibit which shows visitors what life was like here over 300 years ago. At night, the bridge is illuminated and the Drama of Creation presentation is scheduled each night at dusk (only by reservation during winter months).

Outdoor activities in the Lexington area are plentiful. The Maury River, a tributary of the James River, is a popular destination for small watercraft and tubing. There are many trails for hiking, from the relatively flat Chessie Nature Trail, to the rocky Devil’s Marbleyard Trail near Natural Bridge or even the Appalachian Trail in nearby Shenandoah National Park. The area boasts beautiful skies at all times of year.

The surrounding area is home to several wineries and breweries and many antique shops and malls. There are a number of hotels as well as several bed and breakfast and historic inn options to choose from. Camping is also available nearby, at one of several state or national forest areas, as well as privately owned campgrounds.