The National Mall is a 2-mile long public space between the U.S. Capitol and the Lincoln Memorial that includes a number of memorials and the collection of Smithsonian museums dedicated to various aspects of US history.  All of these are free to the public. The monuments are accessible 24 hours a day and are worth a visit day or night. There are also many other attractions in the surrounding area worth visiting, so one could easily plan to spend a few days in Washington. 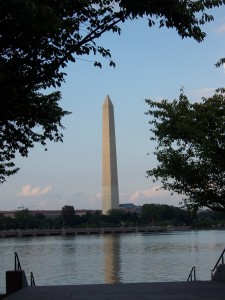 The Washington Monument, the centerpiece of the National Mall, is an easily recognizable landmark. The 555-foot obelisk was the tallest building in the world when it was build in 1884. An elevator takes visitors to the top to an observation deck for a view of the city. (Timed tickets are required and can be obtained the day of visit, starting at 8:30 am. Advance tickets are $1.50.) 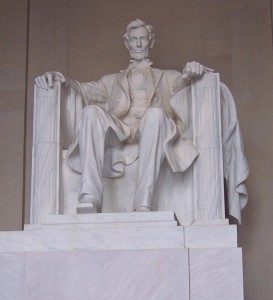 The Lincoln Memorial is a larger-than-life sculpture of the 16th president sitting in a structure modeled after the Parthenon in Athens, Greece.  The steps of the monument begin at the edge of the Reflecting Pool and have been the site of historical events such as Dr. King’s “I Have a Dream” speech. Lincoln’s second inaugural address and his Gettysburg address are both inscribed on the interior walls of the monument. 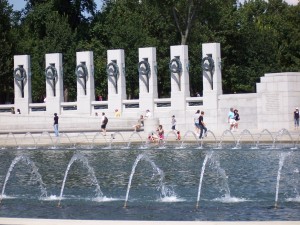 The WWII Memorial is perhaps the prettiest of the memorials. It consists of 56 columns forming two half circles, framing the Rainbow Pool and fountain. 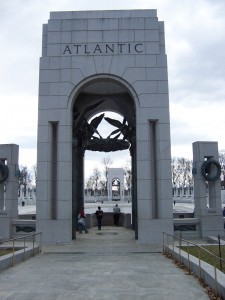 Two 43-foot tall pavilions stand at either side. As with all memorials, each of these design elements has special significance.  It is a powerful place of reflection and remembrance.

The Korean War Veterans Memorial is a moving collection of life-sized statues depicting a military unit on the move. From a distance, one might think a re-enactment is taking place and even up close it is easy to imagine these figures in motion. The result is a haunting and emotional reminder of what it really means to be at war.

The Vietnam Memorial, is a black granite wall contains a chronological list of 58,000 Americans who lost their lives, as well as the Three Servicemen Statue and the Vietnam Women’s Museum. A catalog at each end of the wall contains the location of the names listed. Among all the sites in DC, this is among the most somber.  Hundreds of thousands of 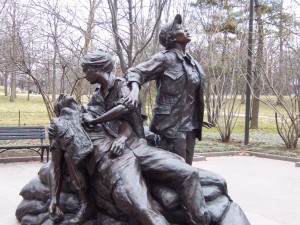 personal items, letters and flowers have been left here. These are collected each day by the National Park Service with plans to construct an Education Center for their display. Some of these can currently be seen online.

The Thomas Jefferson Memorial, which stands in a straight line with the White House, was designed specifically with his architectural taste in mind, and echoes design elements found in his two most famous buildings, Monticello and the Rotunda at University of Virginia. A stature of Jefferson stands in the center of the rotunda.

The Martin Luther King Jr. Memorial is a 30-foot sculpture that sits across the Tidal Basin from the Thomas Jefferson Memorial. It is composed of a likeness of Dr. King as well as a wall of quotes representing his message.

The Franklin Delano Roosevelt Memorial, the only memorial to include a statue of a First Lady, 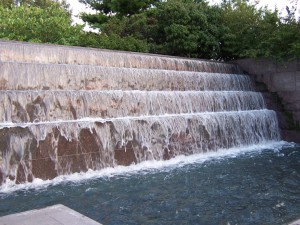 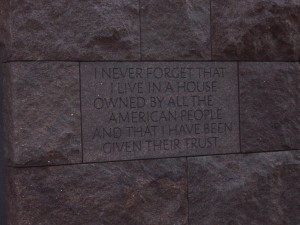 to him it should be no larger than his desk. (A desk-sized 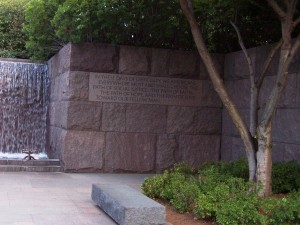 monument was placed in front of the National Archives, but Congress decided this was not enough; the current memorial opened in 1997.)

Taking up more than 7 acres, a path meanders through four outdoor “rooms” and features 21 FDR quotes inscribed on stone walls, as well as related statues and murals depicting historical events. The memorial also includes fountains and numerous benches to sit and ponder.

The D.C. War Memorial remembers the residents of D.C. who died in WWI. It was created as an open air bandstand large enough to hold the US Marine Band with the intent that every concert held here would be a tribute to those who served.

4 thoughts on “Revisit History at the National Mall”