Kauai’s Garden Paradise in Hawaii is the only place I have visited that I could honestly say I could permanently relocate to. With a year round temperature of about 78 and terrain ranging from powdery sand beaches to mountains and cliffs, it the perfect environment for me. (If only it weren’t so far away from everywhere else!) 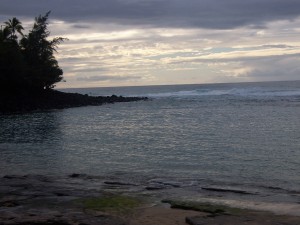 Known as the garden island, Kauai is also the rainiest place on earth, with an annual average of  350 to 400 inches measured at Mt. Wai’ale’ale. We happened to visit during the rainy season, in mid November, but this didn’t dampen my appreciation of all the natural wonder the island has to offer. Even though it rained every day we were there, it was not raining everywhere, and since the main road encircling the island can be traversed in under an hour,

it is easy to just go for a ride to find someplace sunny. We stayed in Lihue, which is fairly central, and over the course of a week traveled pretty much the entire island. (There is plenty more to see, hiking or boating farther inland, plus some areas accessible only via 4-wheel drive. We hope to do more exploring on a future trip.)

It would be impossible to detail everything to do (or even everything we did) in one post, so I will focus here on just a few places: Kilauea Point Lighthouse, Hanalei , Opaekaa Falls, and Hanapepe. 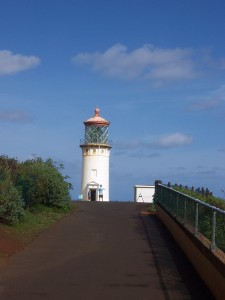 Kilauea Point National Wildlife Refuge is well worth the admission fee and the 0.2 mile walk from the parking lot. The views are amazing, especially on the south side of the lighthouse, where a U shaped crater is all that remains of the 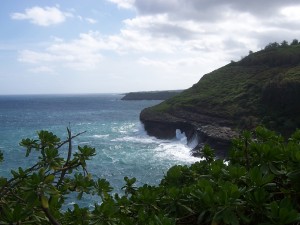 volcanic vent that formed this area

15,000 years ago. (The banner photo on the main website page features this spot.) The area is home to a number of birds, including the Laysan Albatross, which nest on the refuge, and the Red Footed Booby as well as a number of native plant species (signs help

identify these). A number of young Wedge-tailed Shearwaters were roaming about, peeking from under the fence protecting them from visitors (there are many notices warning that the birds are protected, and that touching or harassing them is an offense).

The 1913 Daniel K. Inouye Kilauea Lighthouse is the northernmost point of Kauai and is on the National Register of Historic Places; tours are offered on select days, pending staff availability.

We spent one afternoon wandering the shops in Kapaa Town and headed north, up the coast to Hanalei Town. We stopped to 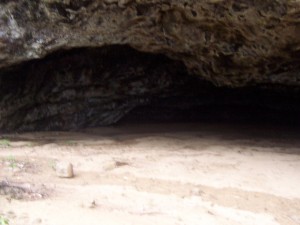 take a look in one of the caves (didn’t see Puff the dragon) and continued on to where the road ends at the shoreline.

Though we didn’t go explore it, there is a trail from here that goes along the Napali Coast. There is a bridge on the main road that frequently floods, cutting off access to the rest of the island. It was raining that day,

so we didn’t want to take our chances and stay too long. We chose a restaurant for dinner and had one of many wonderful seafood dinners.

Though people say that Hawaii is very expensive, it seems to me that if you eat food grown and harvested on the island, it is no more so than back home. 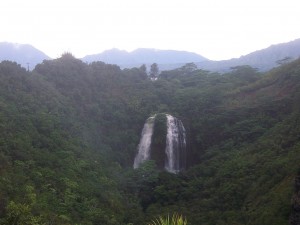 Also on the east side of the island is Opaekaa Falls, which can be viewed from the road, but can be accessed via a reasonable hike. Although we questioned whether we were still on the trail a couple times, as it went around several large boulders, we enjoyed the walk.

Nearby, overlooking the Wailua River, is Poli’ahu, where we explored the sacred temple ruins of 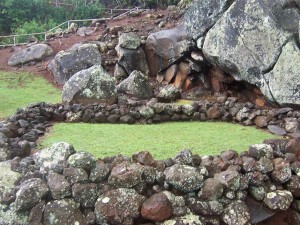 Hawaii’s past. I found the informational placards interesting and the environment as a whole was peaceful. 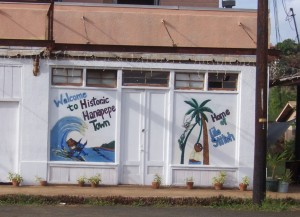 Another day we traveled southwest and found ourselves at the home of Lilo and Stitch, Hanapepe Town. The town is small but considered Kauai’s art

capital, with more art galleries than any other place on the island. It was once a busy town and has been the “location” for films such as “The Thornbirds,” and “Flight of the Intruder” as well as the aforementioned Disney film. We picked up some gifts for family back home and made a trip across the famous Hanapepe Swinging Bridge.

There are many beaches with varying coarseness of sand. We tested out the water at Poipu Beach Park, and I sat watching the birds run into the surf, then back as it chased them up the beach. Not far from here, on Route 50 (which is the only main road on Kauai) we stopped at The Shrimp Station, a roadside stand, for what they advertised as “The Best Coconut Shrimp on the Planet.” After trying it, I would have to say I agree. 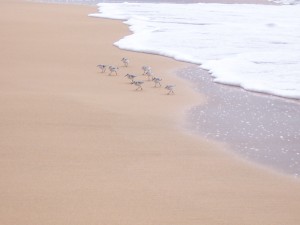 There is much more to see on Kauai and I will share more at a later date. I also hope to return and explore the Napali Coast, more of the beaches and maybe even try ziplining or go on a helicopter tour.