University City is a section of Philadelphia named for its institutes of higher education. The University of Pennsylvania, Drexel University,and the University of the Sciences all call this area home as do several renowned hospitals and the Ronald McDonald House (which hosts out-of-town families who have a child receiving care in town). University City also has a number of arts and music venues and an abundance of restaurants and food trucks with an unending variety of cuisines.

The Penn Museum of Archaeology and Anthropology is especially known for its Egyptian collection and is worth visiting. The more than 1 million items in the collection are from explorations in Italy, Greece, Africa, Asia and Central America. The building itself is of architectural interest. The exterior includes glass mosaics by Tiffany as well as beautiful courtyards and gardens.  The  University of Pennsylvania is also home to the Institute of Contemporary Art, which hosted Andy Warhol’s first solo show in 1965 and is known internationally (admission is free).

U of Penn’s Franklin Field is home to Penn’s football team and also hosts the annual 3-day Penn Relay Carnival, America’s oldest track meet (dating back to 1895) that attracts crowds of up to 100,000 each year.

Public transportation is available in the form of buses, subways and rail lines. Philadelphia’s 30th Street station, one of the busiest in the nation, is where the Amtrak and SEPTA rail lines meet.  The building itself is in the grand Art Deco style of the early 1900s and is fitting a hub that connects rail lines from the north, south, east and west. Inside The Spirit of Transportation, a bas-relief sculpture by Karl Bitter and the Pennsylvania Railroad War Memorial, a sculpture by Walter Hancock commemorate local history. Just outside the main concourse, there are shops and both restaurant and fast food options for travelers. The station also has newly installed “The Porch,” an outdoor public space with seating and scheduled activities. 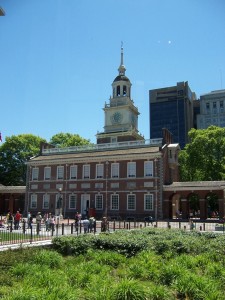