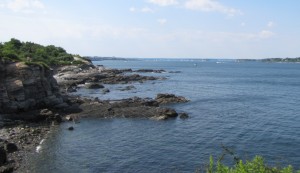 Portland, Maine was for us a stop to break up the ride to Bar Harbour which was to be our home base as we explored Acadia National Park. Though we had only a short time in the city, we discovered that it is worthy of being a destination itself.

Home to not one, but SIX lighthouses, Portland’s history (surprise, given the city’s name) is in shipping. Established in 1632 as a British fishing and trading community, Portland has suffered setbacks, such as fire and loss of industry, but remains a thriving metropolitan center with the current focus on art, shopping and food. Named by the National Historic Trust one of its Dozen Distinctive Destinations in 2003, the city demonstrates the resilience of its natives.

The city’s cobblestone streets contribute to its historical vibe as do its forts and the historically significant architecture found throughout the city. The Portland Museum of Art, in the center of downtown, is home to over 17,000 pieces of art. The childhood home of Henry Wadsworth Longfellow is also in Portland, next to the Maine Historical Society. Paddling enthusiasts can rent kayaks or paddle boards or choose a guided tour and bicycle rentals and tours are also offered.

Since my son was prepping for a hike, we Spent a half a day completing a 10k “year-round” hike organized by the Southern Maine Volkssport Association which took us past the Spring Point Ledge Light.  Built to warn ships of a dangerous ledge in Portland Harbor, the lighthouse took almost ten years from approval to completion and was first lit in May of 1897. Originally it stood out in the harbor at the end of the ledge; a

950 -foot granite breakwater connecting it to the shore at Fort Preble was completed in 1951. The breakwater is open to the public (solid shoes are recommended as the footing can be slippery) and admittance to the lighthouse is by ticket at select times. Since we were hungry after our walk, we stopped at Joe’s Boathouse for lunch and enjoyed both the food and atmosphere.

Before heading up to Acadia, my family knew it was inevitable that we visit the lighthouse we were able to see in the distance from the Spring Point Ledge Light. The Portland Head Light, the nation’s first lighthouse was commissioned by George Washington and built in 1791

and was even more impressive up close. It is adjacent to Fort Williams Park and is owned by the Town of Cape Elizabeth. The 90-acre park offers hiking, picnicking and other outdoor recreation as well as the option to explore the historic fort structures.

We stopped again in Portland on our way home later that week. It was an even shorter stop this time, just for dinner and an overnight, but we did have another wonderful meal at a place we found nearby. Now, I readily admit to being a pizza snob. When asked my favorite food, yep, it’s pizza, and although I like many varieties (regarding crust and toppings), I have to admit I am a bit judgemental when it comes to quality. I am happy to say that the Portland Pie Company met all expectations. We each ordered a personal size, which was a rare treat for me as I could have thin crust (the rest of the family prefers the thicker stuff). Of course being in Maine, I went with the option of putting lobster on mine. It sounds a bit strange, but was delicious! (Unlike everyone else, I had no leftovers for lunch the next day.) If pizza is not your thing (gasp!) they do have other items on the menu as well.

This was our first trip to Maine and we saw several things that make us want to return. Portland (and the Pie Company) are definitely on the list!