Simple Soap Bubbles: The Best Selling Toy in the World 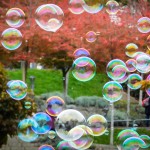 The attraction of soap bubbles is nearly universal. They are delicate and colorful. It is almost impossible to watch someone blowing bubbles and not smile. The temptation to reach out for them, whether to pop or catch them, is almost irresistible. Their unique properties have been the subject of study for both scientists and mathematicians. Soap has been around for centuries; according to Pliny the Elder, the Phoenicians invented it, using ashes and goat’s fat as early as 600 B.C.

Though it has much more practical uses, as early as 1587, people were blowing bubbles as entertainment. A French woodcut from this time depicts people running through a courtyard, chasing bubbles.

Jacques Stella’s 1657 Games and Pastimes of Children includes a poem about children playing with soap bubbles, as well as an accompanying illustration.

Here children scrap and suffer troubles
For nothing greater than soap bubbles,
As though for guineas, pounds and pence.
And yet we see among adults
The same ado, the same results
For things of much less consequence.

In the 17th century, Sir Isaac Newton used them to study the interference of light, and found a way to determine their thickness (for the record, that number is 1/2,500,000 of an inch). Though science already has the answers, bubbles are a good way to learn scientific principles and concepts such as elasticity, light, chemistry, surface tension and geometry.

The popularity of playing with bubbles has been recorded through generations. In 1733, the painting Soap Bubble, by Jean Simeon Chardin depicts a young man with a pipe, blowing a bubble out a window. Daniel Carter Beard’s The American Boys’ Handy Book: What to do and How to Do It has an entire chapter covering “Novelties in Soap-Bubbles.”

An inexpensive diversion, moms have used soap bubbles to entertain children for generations (or sometimes, perhaps, children took the opportunity to annoy mom while she worked, by blowing the soap bubbles from the surface of her pan of soapy water.)

In a 1918 patent application for a bubble pipe J.L. Gilchrist claimed that his product could be made cheaply and also taken apart and put back together easily, “by an unskilled person.” Though this was a useful item, thrifty parents knew that one could fashion a piece of wire, or even string to achieve the same effect.

Apparently, bubble blowers sold well, as manufacturers continued to make a variety of bubble blowing kits and apparatus. Vintage bubble sets from the 1940s included a bar of soap, a dish and a bubble pipe. Commercial sales of packaged bubble solutions began in 1940 when Chemtoy, a Chicago cleaning supply company, began bottling it. Tootsietoy purchased the company in the late 1940s and bubble solution went into full distribution.  Street vendors peddled bubbles and blowers as toys for children and in the 1950s, battery-operated bubble blowers appeared, often with television tie-ins.

During the 1960s, hippies and flower children adopted bubbles as a symbol of peace and harmony, and made bubble blowing even more popular. In the 1970s to 1990s, new companies got in the bubble making business and  increased sales worldwide. (Some say that bubble solution is the best-selling toy in the world.)

In recent years, the bubble market has burst out of the realm of children’s toys. Bubble machines churning out thousands of small bubbles can be rented for use at parties, and many weddings send off the bride and groom in a wave of bubbles. Today’s varieties also have expanded beyond the simple soap solution and also come in scented varieties. Some are even edible!

Educators have seized upon the popularity to help teach science principles in a fun way. Blowing bubbles when it is below freezing results in ice balls, which of course would shatter when they hit the ground. (There are a number of YouTube videos documenting this.) Many science museums have also taken advantage of this popularity and have offered bubble demonstrations and activities including creating a bubble around a person.The Fort Worth Museum celebrated National Bubble Week this past March with its First Annual Bubble Festival.

Like the Hula Hoop, bubbles show that simple toys are often best.