A Reason to Go Poking Around in the Dark 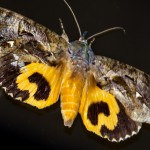 I just learned that we are halfway through National Moth Week. We have an entire week to celebrate moths! As interesting as I find this, as someone who suffers from lepidopterophobia, this is an event I will observe from afar. (My fear of butterflies stems from a relative’s misguided attempts at humor when I was a small child, but that is another story. I have a great appreciation for these beautiful creatures and have made progress in my attempts to overcome this phobia with some success. I now only flinch when they approach.)

When you think of moths, you likely think about the ones that put holes in your wool clothing, or the ones who come into your kitchen in cardboard packaging. Then there are the larger versions that are drawn to your outdoor lights and attempt to come inside when you open the door. Or maybe you go bigger and your mind goes immediately to Mothra, the giant Moth who first appeared onscreen in 1961 and went on to battle Godzilla in 1992. Whatever you think of them, you may be surprised to learn that moths are an important part of our ecosystem.

Moths first appeared on earth 195 million years ago, and coexisted with dinosaurs.  Since then, more than 150,000 moth species have been identified (some say there may be up to 500,000). They are various sizes, shapes and colors. The smallest, the European pygmy sorrel moth, measures 0.1 inch and the largest, the Atlas moth found in Southeast Asia, can have a wingspan of up to a foot. North America alone is home to over 11,000 species and the American Museum of Natural History, in New York City currently has an exhibit of photographs by Canadian photographer Jim des Rivières, Winged Tapestries: Moths at Large,  devoted to them. 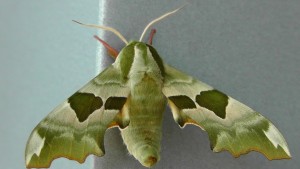 According to the museum, moths have adapted and developed survival techniques particular to their individual needs. Most use their sense of smell to find food and mates, but some also use night-color vision. Some have developed a way to produce ultrasonic clicks that effectively jam the sonar of bats searching for food. They have two sets of eyes, one for light and dark and the other to see color, shape and movement. The reason they fly in circles around porch lights is because artificial light confuses them.

Despite the fact that they are active at night, moths are known to be great pollinators and are attracted to flowers that are pink, purple, white and pale or dull red, especially those with a strong and sweet nighttime odor. While some are considered garden pests as caterpillars (the tomato hornworm will mature into a hawkmoth), others are beneficial (the yucca plant in fact depends on the yucca moth for survival). Scientists ook to moths when researching the impacts of climate change. The large number of species provides many research opportunities.  Moth caterpillars are also an important food source, for many animals and even, in some parts of the world, humans.

Probably because moths are mainly nocturnal, they simply don’t get the same appreciation as their colorful cousin, the butterfly. A group in New Jersey has been working to change that. Since 2005, they have held public Moth Nights several times a year, with about 30-50 people attending each one. The Friends of the East Brunswick Environmental Commission started National Moth Week in 2011 to “promote the understanding and enjoyment of moths and to raise awareness about biodiversity.” They have over 30 partners worldwide that support their mission. The National Moth Week website indicates events have been planned in every state but one and more than 40 countries. 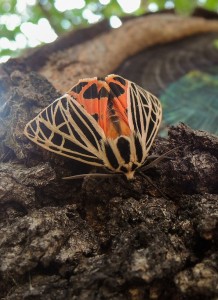 This year’s spotlight moths are known as underwings. They have rather dull colored forewings, which work as camouflage while they are resting. However, when they spread their wings, their hindwings are seen to be bold and colorful, with markings that are orange, red, black or blue. Moth-ers (those seeking out moths) take photos and contribute them to websites as well the National Moth Week Flickr group which now has over 44,000 moth photos.

Though they appear to be similar, moths and butterflies are distinctly different. While most people think of moths as being rather dull, there are many varieties that are in fact quite colorful. It is true that butterflies are active during the day and most (but not all) moths are active at night. As a result, butterflies warm up by sitting in the sun, while moths move their wings. Some moths however are active during the day. One way to differentiate between the two is to look at the way they hold their wings. At rest, a butterfly’s wings are usually held together, above its back, while a moth’s wings are horizontal, like a roof. Their antennae also differ: butterflies’ antennae are thicker at the tips, while moths are straight. Butterflies rely more on sight; moths use their sense of smell. While butterflies cannot detect sound, moths in fact have ears.

It’s not too late to join in on the fun. The National Moth Week website has an interactive calendar to help you find an event near you!