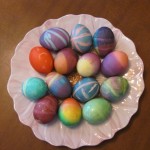 Decorating eggs is an art form. From drawing on eggs with crayons, then dipping in food grade dye, or painting or stamping images on eggs, to the elaborate pysanky creations made using hot wax, it is a process. Like many other traditions, its exact origins are unclear. Aside from actual eggs, one can also find ornamental eggs created from wood, stone or the famous (and now priceless) Faberge eggs made in the 19th century.

There is no definitive answer on when or where or even why the tradition of dyeing eggs originated. There is evidence that the custom is older than Christianity, as ancient cultures decorated eggs annually in the spring. Decorating eggs has been a part of the celebration of Nowruz, (or New Year) which coincides with the spring equinox, even back to the time of the ancient Persians.

Eggs are a symbol of new life and one of mankind’s eternal unsolvable mysteries (which came first?).  Probably for this reason, many cultures’ creation myths involve eggs, with either a deity coming from an egg or the universe as a whole.

When talking specifically of the relationship of eggs to Easter, some say that the hard shell of the egg represents the sealed tomb that Jesus was laid in after his crucifixion and that cracking the egg symbolizes His resurrection.  This analogy can also be extended to the custom of rolling eggs; that this symbolizes rolling the stone away from the tomb.

It is a long held tradition for Christians to “fast” during Lent, the 40 days leading up to Easter. This can take different forms, but has changed over the ages, and usually includes abstaining from certain foods on certain days. Apparently at one point in history, eggs were a forbidden food during this period. On a side note, according to The Holiday Spot, this led people to use up all their eggs before Lent began; thus the origin of Pancake Day (aka Donut Day, Mardi Gras, Fat Tuesday, etc.). Since eggs were forbidden during Lent, they became a major part of the Easter meal.So decorating eggs was in anticipation of the celebration to come

Other Easter traditions are more recent. The Easter Bunny seems to be, like the Christmas tree and Santa Claus, another gift from Germany. Tales of the Osterhase, an egg-laying hare, came to America in the 1700s with German immigrants and spread across the US. Children were attracted by the thought of making nests for what was to become a rabbit (rather than the less prolific hare) to lay brightly colored eggs. According to History.com, soon the long-eared critter started bringing candy to children and decorated baskets eventually replaced the nests.

Cadbury, a company known for its egg-shaped candy and its annual search for the Cadbury Easter Bunny, also gives some background on the tradition of the Easter egg. The company traces the appearance of egg-shaped toys as far back as the 17th century. On its website, it tells of Victorians giving children “cardboard, plush and satin covered eggs filled with Easter gifts and chocolate.” The Cadbury egg itself dates back to 1875. The first version was dark chocolate, filled with sugared almonds. As chocolate production changed over the years, so did the Cadbury egg; now multiple versions appear in stores every spring.

Whatever the origin, decorating eggs is as individual as the person taking part. It can be done in as little as minutes, or even take days to achieve the desired design. Easter eggs can be hard boiled, and later eaten, or one can use the shells after blowing out the egg, which of course results in a more delicate piece of artwork. Artisans also use other medium to produce lasting art of a purely decorative sort. Whether they are religious in meaning or not, decorated eggs have been a welcome sign of the season for centuries.

Related link: How to Make Polish Pisanki Eggs for Beginners

You make me want to get the boiled eggs out!

We have not been consistent with egg decorating (some other pressing need always seems to come up), but I always enjoy it when we do!