The Underappreciated and Disrespected Sloth Has its Own Day 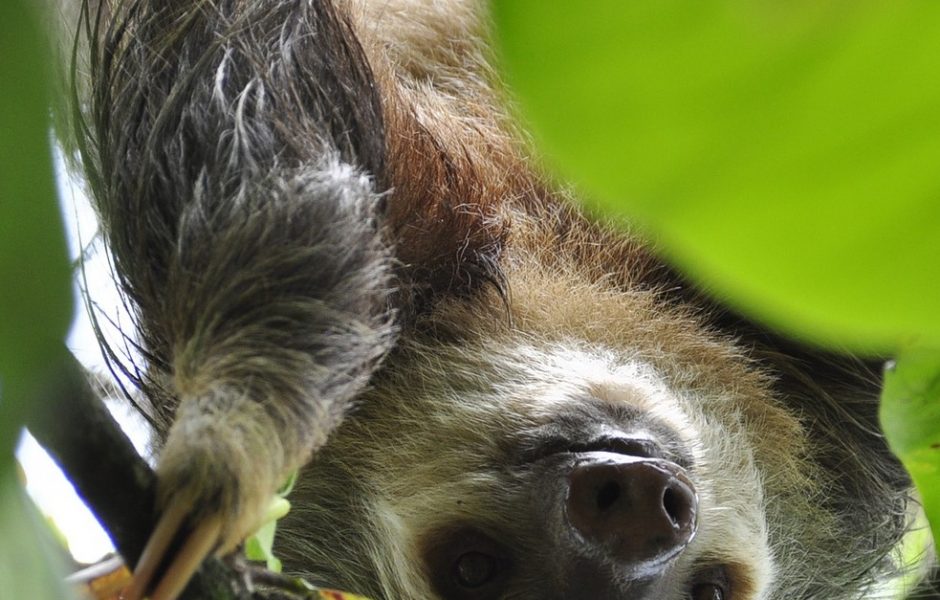 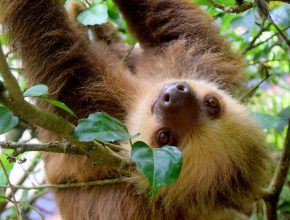 Of course there is a day to honor this adorable, under-appreciated creature. While its name is often used as a slur to describe lazy individuals, the poor sloth is slow because it has no choice in the matter.  Whether two- or three-toed, the sloth is simply not built for speed.

They have weak hind legs and long claws which make it difficult to walk on land and unlike most other mammals which have only seven vertebrae, the three-toed sloth has  nine, which enables them to turn their heads 270 degrees (the two-toed sloth has only six).

They weren’t always this small and adorable

While today’s sloths are the size of a small dog, scientists have identified much larger varieties that existed in the past. In fact, a few million years ago, Megatherium, a giant ground sloth from South America was the size of an elephant, weighing in at 8,000 pounds. There is also evidence that a marine species of sloth once lived and one theory is that it used its long claws to stay on ocean floor to feed. Though today’s sloths spend most of their time in trees, they are good swimmers, which those who have been startled by a sloth falling into the water have discovered. In this area, they actually excel over other mammals – a sloth can slow its heart rate and hold its breath to stay underwater for up to 40 minutes.

Sloths are folivores. They eat foliage and fruit from trees, getting most of their water from plants. They don’t have to move far in their search for food, as they can stretch their tongues to reach leaves up to a foot away. Some two-toed sloths have also been seen eating insects, small reptiles and birds or even human feces. In 2001 in Peru, scientists found a two-toed sloth scooping out their latrine – and eating the contents. (It took 25 years observing this to fence off the latrine.) Their stomachs have four compartments and it takes almost a month to digest a meal.

Besides their lack of speed, sloths are known for being champion sleepers. They spend much of their time hanging from trees and more than half of it sleeping. Reports vary, but it appears these mammals spend 10 to 20 hours each day asleep.  Since their claws hold fast to branches, dead sloths may remain hanging in trees.

Averaging only 25 percent muscle, they move slowly and only when they need to. This is actually a benefit as it makes them less detectable to predators such as jaguars, ocelots and eagles. This minimal muscle mass also means they get cold easily, so they are not well suited to live outside their native Central and South America. They descend to the ground once a week for toileting purposes.

They mate and give birth in trees (have one baby at a time) and babies travel hanging onto their moms for the first nine months. Sloths are typically solitary creatures, though in some cases the young may stay with mom for several years. Since they move so little, their mating seasons are not regular – it can take more than a year for them to find each other. When males do compete for a female’s attention, it is done while hanging from a tree with their front claws and fighting with their rear paws and claws.

A sloth may someday save your life

In a way, sloth hair creates its own unique ecosystem. It houses algae, moths and insects and is a source of fungi that can repel mosquitoes and possibly fight human diseases, including cancer. The algae can serve as a camouflage of sorts, so the sloth as hosts also benefits.

Today there are six living sloth species, but scientists have identified at least 50 different species over the past 35 million years. They are in the same family as anteaters and armadillos. You can learn more about sloths at Slothville, the official headquarters of the Sloth Appreciation Society. The Pan American Conservation Association, a baby sloth orphanage in Panama rescues sloths found in urban areas and tends to orphans until they are ready to be released in the wild.