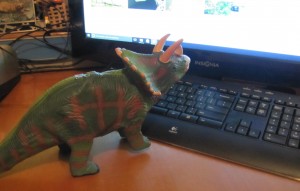 I am turning 50 this year and am beginning to see disturbing signs. Despite the fact that I am college-educated and see myself as an intelligent person, I am more and more being frustrated by what I don’t know, specifically with regards to technology. This is amplified by the ease with which some other people pick these things up.

I remember as a child being puzzled at my grandparents’ difficulty with technology. It was all rather simple. Technology made things easier.  I know that these things come easiest to those who are younger; I have been tech support for my parents who, although they use computers regularly, sometimes need a little help. There are some programs I need to relearn each time I use them, since I do so infrequently, but computers and technology don’t scare me. I use them regularly, so why am I now struggling with what the rest of the world seems to find easy? The joke about asking a five-year old to help is no longer a joke, so it is not at all funny.

My first experience working with computers was working with my college newspaper. I was handed two floppy disks and sent to the computer lab with printed instructions:  insert the DOS disk, turn on the computer, wait, insert the PC-Write work disk, create a file and start writing, then save and remove disk. By today’s standards, this was a lengthy process. At first, I was a bit intimidated, but it was really pretty straightforward and easy. No problem.

After college, I worked for a computer trade magazine, where we wrote about what was then very cutting-edge technology: the idea that computers made by various manufacturers were now able to work together. In our office, we used Digital computers and their proprietary word processing and in-house email system. Unlike most companies, our email transcended our building and was connected via phone wires to other offices throughout the country (we were very cutting edge). Although I had no computer background, I was able to write about hardware and software and connectivity as well as industry standards and protocols. I will admit that I didn’t always fully understand the more technical information, but could ask the right questions. I saw my role as a translator for the office managers, to help them understand the new technology in simpler terms. The tech guys (at this time, it was pretty much just men) were happy to answer my questions and I got positive feedback when the articles ran. Basically, they were happy that I “got it” and could get the information out to the people who made the purchasing decisions.

Fast forward a couple decades. Most houses have multiple computers (plus tablets, smartphone, smart TVs, etc.). These are all meant to make our lives easier. They are, in theory, simpler to use. They are, supposedly, more intuitive and can be customized for your individual wants and needs. (We even have SmartFridges now!)

Like many other people, I use a computer every day. In fact, I am at my computer for a large part of almost every day.  I use it to write, research, read, communicate with people, edit photos, and most recently, create and update my website. This is where I have hit a wall.

I have always been independent and have a “Do It Myself” mentality.  If I don’t know how to do something, I am willing to learn. I want to know how to do things, how to troubleshoot and fix things myself.  Right now though, I am overwhelmed. I keep telling myself that I can do this. I understand the basics of computers. I can follow directions, but lately it seems like crucial steps are missing. I read directions, which tell me to complete Step A, then Step B, Step C. Next you move on to Step D, but if you don’t have X, Y or Z, you need to click here, which takes you back to Step B. One afternoon I found myself in a seemingly endless loop and had to call in my own personal tech support, who, unfamiliar with the specific program, asked me some questions I did not have the answers to. (Which somehow made me feel both more and less stupid.)  Ultimately, the problem was solved, but not without gnashing of teeth and feelings of inadequacy.

I am starting to think the problem is the “intuitiveness.” What is intuitive today was not so twenty years ago. My kids have taken to telling me that I am “cute” in a way that is not quite so condescending that I hear “You are stupid.” To them, Snapchat is intuitive. To me, it is not. I keep staring at the screen, tapping and swiping until something happens, and I hope I will notice what I have done so I can repeat the process (usually this means I wait until the kids are around and ask them to show me).

Keeping up with technology today feels like playing a game where the rules keep changing. Of course this is a part of life: things change, they always have and always will. However, the speed at which they change today is difficult to keep up with. New apps and programs are developed each day, and older ones are upgraded and improved.

Technology has of course generated its own language. This is not unusual; most disciplines have their own terminology, those terms and phrases that the general population doesn’t use. In fact, most people don’t even know specific terminology for say, composing music or welding pipes, or those used in farming or medicine. And people in specialized fields generally don’t expect others to know and understand these terms. But technology is different. The language of computer technology has permeated society. It is everywhere.

Years ago, adults had no need to keep up with the current terms. Youth have always had their own phrases, and keeping them separate from the older generation was the norm. But today, when you hear young adults using unfamiliar terms, they may be relevant. They may be words that you are expected to know, that will be a part of your job, instead of the youth slang previously used merely to befuddle older people or make them seem out of touch. Now we have to figure out which ones are relevant and which we can ignore.

Many people carry multi-functional, personally-customized computers around with them every day. Social media has brought technology to the forefront and the ability to “Google” anything means that people can further customize their systems. This I think has created a society that accepts this as the norm and people have started to assume everyone else has the same basic knowledge. If not, “just Google it.” But how do you know what you don’t know? How do you learn when the “basics” aren’t so basic?

This made me think about a teacher I know who had students write detailed directions on how to do something. The example provided to them was how to make a peanut butter and jelly sandwich. For the purposes of this exercise, nothing was to be assumed. (It was actually best to think of Amelia Bedelia as being the reader.) This was a challenge for many students.  The point of the exercise of course, was to develop better writers, ones who would not make assumptions about their readers.

When you are writing a “how-to” in particular, you want the reader to understand and be able to follow the steps. When you start off promising “5 Easy Steps” they darn well better be easy for your target audience. Making people feel stupid is not a good way to attract a following, and it is simply not nice. Until I find that easy tutorial, I’ll keep muddling through, and grumbling.  I’m getting older, but I’m not ready to disappear or surrender yet. Expect this dinosaur to hang on a while longer.