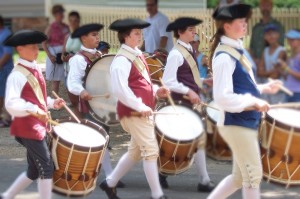 You know that list of top people you would want to invite for dinner? The Obamas (and the Bidens as well) would certainly make my list. As we prepare to say farewell to someone who will certainly have more than a brief mention in future history books, I feel compelled to offer a thank you. I have never been prouder of my country than I was that day in November 2008 that a black man was elected to the presidency. I believed in his message, but honestly I wasn’t sure that our country was at the point that they could look past color and see just a man. I consider the nation fortunate that they did.

It is not my job to record his legacy; that I will leave for the historians, but I am confident that future generations will see him in a favorable light, even though his critics are in abundance today.

What I will remember most about the past eight years is the image presented to the world. President Obama has been well respected in other countries and has shown grace in the face of opposition at home. He has a dedication to family that I greatly admire and a willingness to be real, in a city that often isn’t.  He demonstrates a willingness to hear other people’s views and is not above meeting them at their level (even those who are too young to vote) His love and respect for his wife and daughters is obvious as is his genuine concern for all people.

Also unlike many in Washington, he shows respect for others, even when he holds opposing views.  When he spoke on behalf of Hillary Clinton, he was quick to suppress boos or derogatory comments, defending the rights of those who were there to voice their opposition. Likewise, our First Lady refused to trash talk, insisting that “We go high.” Throughout a divisive and at times very ugly campaign, Barack and Michelle Obama maintained standards of decency and showed class and grace.

There has not been a family in the White House in my memory that has had such a complete absence of scandal or for that matter any tinge of social impropriety. After the past few decades, it has been refreshing to have the confidence, especially in this day and age, that our president would not embarrass us on the world stage. It also has been a pleasure to watch the “Dad-in-Chief” interact with his children as well as the antics of the most high-profile bromance in our country.

President Obama has been true to his role, right to the end. He has worked to encourage those who are discouraged or fearful and has continued to express the vision of hope which came to the forefront of our nation almost a decade ago. He has committed to the principles our nation was founded on, calling for a peaceful transition, while reminding us that we are a government “of the people.”

Change is never easy. Dramatic change is even more difficult. To say that I will miss this president is an understatement. President Obama and his family have shown us how those in power can and should behave. They have served as role models for those in public office and hopefully some of our elected representatives are paying attention.

President Obama, thank you, not only for being a good president, but also for being a shining example of a good man.

Click here to watch the video of President Obama’s meeting with Kid President.