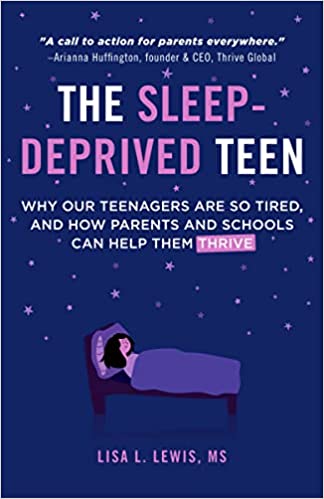 In her new book, The Sleep-Deprived Teen, Why Our Teenagers Are So Tired and How Parents and Schools Can Help Them Thrive, Lisa Lewis presents valuable information on teenagers and sleep including the dangers of not getting enough. She’s done the homework for the rest of us and presents here a thorough, yet accessible summary of many studies, laying out a convincing argument that teen sleep deprivation is a public health issue. This issue is so important, she argues, that the question isn’t what can we do, but given what we know about the dangers, how can we do nothing?

As a concerned mom and journalist who noticed that her teen wasn’t getting enough sleep, Lewis dove into the research and became an expert on teens and sleep. She looked at the body of research as a whole, which overwhelmingly shows the dangers of sleep deprivation, particularly when it occurs during the teen years. Besides the obvious issues, she found that 73 studies indicate that inadequate sleep increases the incidence of teen depression. She also found that sleep deprivation can mimic the signs of ADHD, which may lead to inappropriate courses of treatment.

Of course it’s true for all of us that “When we don’t sleep well… we’re a little bit more reactive and impulsive,” but since they are still growing and learning, fatigue, stress and emotional arousal all have a greater impact on teens’ rational thought. Besides increased irritability and increased inattentiveness, researchers report teens also have lower grades, decreased athletic performance, greater risk of depression, greater risk of suicidal ideation, and more suicide attempts.

The science is clear: teen brains are different. In fact, there are physical changes – the limbic system, that part that controls emotions and reward seeking, is larger in adolescence. It isn’t until the mid-teens that the brain’s “braking system” kicks in, and the prefrontal cortex enhances executive functioning. This process takes time; the connections between these areas continue to strengthen through early adulthood.

Studies also show quantitative benefits to getting enough sleep. Teens who get adequate sleep get better grades, perform better in sports and are more pleasant to be around. Sufficient sleep also can guard against the negative impacts of peer pressure.

Lewis is a huge proponent of changing school start times to what the American Academy of Pediatrics recommends: no earlier than 8:30 am for teens, which is much later than most American high schools currently begin their days. Realizing that this suggestion appears to be radical, Lewis also provides actionable steps for parent groups to follow. She says that most objections to this idea are actually perceptions of problems that are easily overcome.  She advises parents to focus on the benefits of the change and on the consequences of maintaining the status quo.  It is important, she stresses, to realize that this is a public health issue. She also points out that the move to later start times is not as new and radical as it seems; school start times have crept earlier over time, largely due to transportation issues. And many schools have successfully switched back to later start times. Lessons can be learned from them.

The Sleep-Deprived Teen puts everything you need in one place. It sums up the science in an easy-to-read format, but it goes beyond explaining the problem. It also offers parents actionable suggestions to help their families get more sleep which may just lead to a more harmonious household. There are a lot of parenting books out there. This one deserves a place on your shelf.

Note: Though an advance digital copy of this book was provided free of charge, no compensation was made for this review and the opinions are exclusively mine. This post includes an affiliate link; should you choose to purchase the book via this link, I receive a portion of the proceeds. KY