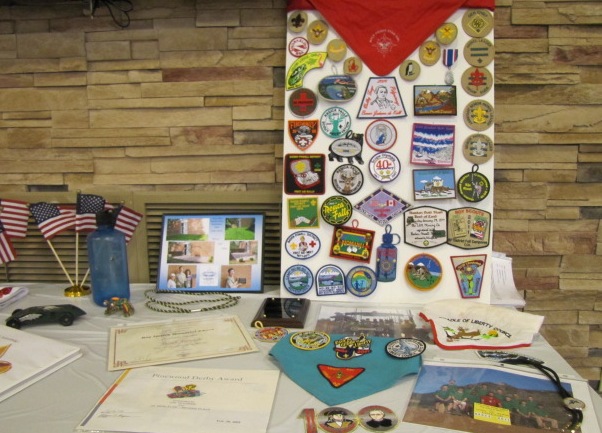 Being a long time Girl Scout leader and the parent of an Eagle Scout, I have spent a bit of time reflecting on the importance of Scouting. Both Boy and Girl Scouts have taken a beating in the “media” in recent years, and one has to wonder,“why?” Yes, there have been some individuals who have made bad decisions and done bad things, but isn’t that true of all aspects of society? How can one blame an entire group for the (sometimes only perceived) misdeeds of the few.

Both organizations share similar values, as well as a motto – “Be prepared.” This of course makes sense when you remember that the founder of Girl Scouts used the Boy Scouts organization as a model. The Boy Scout Oath and Girl Scout Promise likewise are similar. Both start “On my Honor…”

What a powerful concept. I am going to pledge my honor, my integrity, my good name. I would guess that many don’t think about it when reciting a pledge, but this really is a big deal. At the risk of sounding like a dinosaur, honor is one of those intangibles that is the very essence of an individual. It is what makes one trustworthy, respected, a good friend.

Next, “I will try” (for the girls) or “I will do my best” (for the boys). Again, there is power behind the words. This wording recognizes our humanity. These young men and women pledge to work towards the ideals given to them in their respective Laws. They also recognize that none of us are perfect, but even when we fail, we still try to do our best. (I am certain that most, if not all, Eagle Scouts and Gold Award recipients have experienced some sort of failure, which is likely one of the best learning experiences one can have.)

Some of the wording here varies slightly, but the idea is the same. As in the documents which founded this country, God is a part of our lives, and service to our country and our communities is a given. Both of these youth organizations are heavy on the community service aspect and both recognize high achievement in service with their most esteemed and valued awards. Funny enough, this is the point where both organizations have gotten criticism – much of the controversy stems from religious beliefs.

Both groups encourage youth to work toward religious awards – their own religion, in conjunction with their own religious leaders, not one espoused/run by the organizations. People are entitled to their own religious beliefs and we need to be able to get along, even when we do not agree. I commend Girl Scouts of the USA for making a point that a girl can substitute another term for God based on their own personal religious doctrines. What is upsetting is the fact that some religious people do not understand that everyone may not share their views and then use these policies to claim that the organization has an “agenda.”

The other hot topic that has circulated the internet for the past few years, curiously enough, comes from Girl Scout USA’s refusal to take a stand on a controversial topic. You probably have seen something to the effect that Girl Scouts supports Planned Parenthood and is pro-abortion. As best I can tell, this stems from a conference in New York City several years ago where literature was left on a table in a convention center in which Girl Scouts had an event. Anyone who has been to a major convention center (or a large city) should know how difficult it can be to avoid seeing or even being handed such things. GSUSA has since published statements to clarify their position, obviously to no avail. I also have seen a rant from a pastor who adds that Girl Scouts encourages lesbianism. This would be laughable if there were not people who believe this sort of thing (because it is on the internet, after all).

The Boy Scouts of America, of course, were attacked for not being inclusive, and then for changing their membership policy regarding scouts. I support their recent decision to allow all boys to participate in scouting activities, without regard to sexual orientation. I especially applaud their statement, “Any sexual conduct, whether homosexual or heterosexual, by youth of Scouting age is contrary to the virtues of Scouting.” I think that sexual orientation is and should have never been an issue. In my experiences with Scouting (both organizations) sex is not a subject that has been or should have been discussed. Scouting activities help youth grow and become the best world citizens they can be. This can be seen in the respective Laws that guide them :

A Girl Scout promises, “I will do my best to be honest and fair, friendly and helpful, considerate and caring, courageous and strong, and responsible for what I say and do, and to respect myself and others, respect authority, use resources wisely, make the world a better place, and be a sister to every Girl Scout.”

Again, there are a lot of similarities. These Laws list good, solid values. How can anyone take issue with promoting values such as honesty, courtesy, helpfulness, friendliness, responsibility, reverence? These are the core values in scouting. Any young man or woman who continues to participate in Scouting really has no choice but to assimilate at least some of these. All the young men and women I have known who stuck with the program into high school are model citizens. They are the doers and shakers. They are the ones making the world a better place. I am proud to know each and every one of them. Frankly, I wish more people had grown up in Scouting.

5 thoughts on “A Moral Compass”