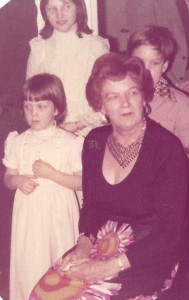 Gertie with all three of her grandchildren

Birthdays are a big deal in my family.  Even though my mother would joke about how she was the one who had done all the work so many years ago to make this day possible (thanks again, Mom), on our birthdays, my sister and I were made to feel like princesses. Mom made sure every detail was attended to. There was always a party, which may or may not have fallen on the actual date of our birth. When it didn’t, we got two celebrations. There were banners, balloons, streamers — we had the whole works. Growing up, it was essential that parties centered around a theme, chosen by the birthday girl, complete with matching plates, napkins, and cake decorations. Although these all were memorable, the birthday party that really sticks out in my mind was not mine. The year my grandmother turned 60, my mother and her brother went all out. They planned a surprise party with the theme: “This Is Your Life.”

My family has a flair for the dramatic, so this was an event to remember. They rented a hall and invited everyone they could find from her past. My grandmother had moved around quite a bit and had an interesting assortment of jobs, so there were many former neighbors and coworkers. She was also the kind of person who simply attracted people. If you were to go any place she frequented regularly, most people there knew Gertie. No matter where we went, she seemed to run into someone she knew.

On this night, my grandmother thought she was going to hear her son at a speaking engagement. As the time for her to arrive approached, a number of people she hadn’t seen for years were crowded into the kitchen of the catering hall and told to be quiet. There were still many of us in the room when she entered. Rather than the typical “Surprise,” the band stared to play (yes, they hired a live band) and we all sang “You’re Nobody ‘Til Somebody Loves You,” her favorite song.

When she had recovered from the shock (well, almost), she was told to sit in a chair in the center of the dance floor. My uncle then got up and read from the script. He explained that we were all there to celebrate her life, without which, none of us would be there in the room, or for some of us, even exist. The story started with her birth, in Scranton, PA and went on from there, announcing each of her siblings (she was the oldest). This was the cue for each of them to come out of the kitchen and give her a big hug (all accompanied by a specially-chosen song). My job for the evening (besides going to hug her at my chapter in her story) was to man my Panasonic cassette recorder, to try to capture at least part of the excitement for her to enjoy later.

Her story continued and she was obviously thrilled. She cried as she got to see her siblings and cousins she hadn’t seen in years. She sat and nodded as her life was narrated, hearing about former neighbors and coworkers from long ago. Despite the growing numbers of people who came out of that tiny kitchen, she was still surprised at seeing them walk out and toward her. I can still see the expression on her face, one of obvious shock and joy. The most emotional point was when my uncle read a “letter from his brother,” who lived four states away. The letter expressed his wish to be there and how much he was looking forward to seeing her and giving her a great big hug. Then, in game show style, our emcee announced, “That next time is here,” and out he came. This was then followed by his wife and son who also “couldn’t be there,” but then were.

This was a party to remember, one that could not be topped. It was in 1977. My grandmother was able to stay in touch with many of the people from her past for the years that followed. I was 10, but this day still sticks in my mind. People are important. Celebrating them is important.  Relationships are valuable. It is never too late to rekindle them.

3 thoughts on “Celebrating a Special Day In a Special Way”