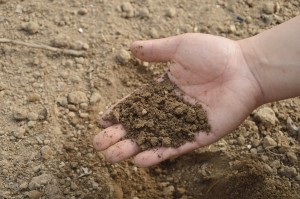 My first experience with a garden came as a child when my dad dug up a large plot of land in our yard. My parents left it to my sister and I to decide what to plant. We decided on vegetables and flowers, and the area was split roughly 50/50. It was fun to watch the carrots and radishes come up and we enjoyed having fresh salads with dinner most nights (that is, until a small green worm came along with the lettuce on my plate one meal). We also kept a pitcher of fresh flowers on the table, which was nice to see and it was exciting to know that we grew them ourselves. We repeated the process for a few years, though we scaled it back a bit to make it more manageable to maintain.

As an adult, I was excited when I finally had a yard and could plant a vegetable garden.  We grew tomatoes and peppers that were tastier than what we found at the grocery store (and a cost savings as well) and carrots and radishes that, though not very large or pretty, made a good addition to a salad, or as a snack on their own. This garden was too small for flowers, so I settled for growing them in planters on the porch where they made me smile each time I walked through the front door. Having a garden proved both economical and healthy.

It wasn’t until having a particularly unpleasant experience while volunteering for my children’s school that I realized the therapeutic effects of gardening. I was responsible for an activity at the school and there was a disagreement about how certain details should be handled. To make a long story short, the principal called me and another mom into his office to settle the dispute. (Growing up, I was a good kid. This was my first time in a principal’s office.) I am embarrassed to admit that tempers flared and there was yelling involved (until the principal raised his voice, then we were silent). His attempts at mediation solved the immediate problem (I was in the right) but not the underlying one (we were unable to work together after than point).

I went home, angry at her, upset with myself for losing my cool and embarrassed by my behavior in front of the school principal (yet thankful the kids had not witnessed it). On my to-do list that day was replanting recently purchased flowers into the stone planters on our porch. As I worked at this task, a calm came over me. The tension seemed to melt away. Something about the feel of the rich soil in my hands, the dirt sliding through my fingers, was soothing. I thought about how I had made mud pies when I was young and smiled. We would collect berries, seeds and small flowers and set them on top of mud that we had created (mixing dirt with water until the consistency was just right) either in Frisbees or plastic plates and offer our “pie” to our parents or siblings. I finished and was able to continue my day with a smile.

I suppose that the sight and fragrance of the flowers could also have contributed to my change in mood, but what I remember most is the dirt, with its pungent earthy smell. Arranging the plants in a pleasing manner also took some time and allowed a certain amount of creativity. Even the process of scrubbing my hands afterward, scraping the dirt out from under my fingernails, was calming. I made note of the reaction and vowed to do this more often.

This event was years ago, but the lesson has not been forgotten. I still plant a garden most years and look forward to the process. As the winter comes to an end, I start to plan the details while perusing catalogs full of flowers and unusual produce. Sometimes we try something new; most years we stick to the basics. We keep it on the small side, as I prefer the initial process (and of course consuming the harvest) to the tending, prompting my husband to call my gardening style Darwinian. He may have a point there.

Tagged on: gardening, mud pies, playing in the dirt