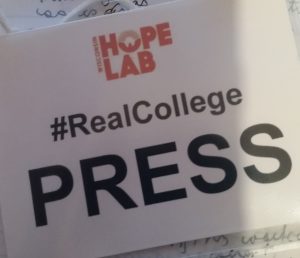 Yesterday I attended the second annual #RealCollege: A National Convening on College Food & Housing Insecurity. Just about a year ago, I learned that there is a significant issue on college campuses today: too many students go without proper housing and not enough to eat. I was surprised at this fact and the deeper I explored the issue, the more surprised I became. Earlier this year, I wrote about the incidence of college hunger for Pacific Standard and The Progressive.

A two-day conference (one day of panels and one of workshops), #RealCollege was eye opening in many ways. Many speakers commented (in a thankful way) that they knew they didn’t have to explain the issue, that those in attendance already knew the scope of the problem; many also expressed relief that finally people are talking about it. As evidenced by the attendance (twice what was expected, which was more than double than last year’s number) those who are working for a solution are now finding each other and sharing resources.

Sara Goldrick-Rab (founder of the Wisconsin HOPE Lab that has fast-tracked researching the issue and connecting resources) stressed that unlike many other fields, this research is collaborative, not competitive. Their research found that “people were doing this work around the country and had no way of communicating about it.” This year’s 400 attendees came from 29 states and the District of Columbia, included representatives of 108 colleges and universities (including presidents and faculty), as well as foundations, community-based organizations and 40 students.
Some important takeaways of the day for me were:

We need to increase awareness of problem.

The incidence may be higher, but this is not a new issue. Insufficient food and housing has been a concern for some college students for decades. Awareness is growing, but it is still an invisible issue. We need to acknowledge that it is a societal problem, not an individual problem. We have the data to demonstrate the issue is significant and systemic. There are many intertwined circumstances that contribute to the problem and we will need to use a multi-pronged approach to find solutions.

We need to increase awareness of available services and programs.

Programs and services aren’t effective if no one knows they exist. The communication and collaboration of the past few years are encouraging, but more needs to be done. Many people are unaware that they are eligible for programs such as SNAP, TANF, AFDC, Medicaid and HUD services, or do not know how to apply for them. Some individuals even lack the resources to access the FAFSA. Some states have supplemental programs and many community organizations provide more specialized services. More than 500 colleges today have food pantries on campus (some are open to all students, not just those with demonstrated need) and some offer text alerts about when and where free food is available. At some schools, professors have been encouraged to provide lists of resources on syllabi or through other means. Though all this is useful, more needs to be done to inform students that they have options and resources.

We need to reduce stigma and shame.

Food and shelter are basic needs. There is no shame in asking for and accepting help. Many of us are just a paycheck or two from being in the same situation. We need to look at hunger and homelessness as temporary, with those experiencing it as “going through a rough patch,” not as a static state of being. Moving resources out of the shadows has proven effective at many schools. Providing a community approach, with help applying for services and positioning food (and wardrobe) cupboards in central locations has increased participation rates. Professors who offer to help students who may be struggling with food or housing insecurity make themselves more approachable to students in need while also educating everyone that these situations are not isolated incidents.

We need to include students in the solutions.

This requires two-way communication. We need to advertise services in a way that gets the message to the people who need to hear it, and we need to listen to what they really need. This will likely vary from school to school. Students at urban and rural schools have different needs, as do students of different ages and from different cultural backgrounds. Food pantries are nice, but in most cases can only solve part of the problem. Housing, transportation and child care concerns are other common issues that need addressing. Some students also benefit from guidance in things such as financial management or cooking skills. Open, non-judgmental communication is necessary.

We are all in this together

The most emotionally powerful moment of the day came during one of the Q&A sessions. One of the panelists, Justice Butler, until recently a homeless student, in a clearly impulsive moment, asked all those who have at some point been homeless to stand. The room was silent and a significant number of attendees (close to 10 percent) stood, some nervously. She then asked them to look around. Many were visibly surprised how many others were standing, as were those of us who remained in our seats. It was a powerful visual of how invisible the issue truly is and how you have no way of knowing what others’ lives are or have been like. You can’t “see” homelessness.

Before leaving to catch my train, I took a moment to talk to Justice, whom I interviewed for my articles and had been looking forward to meeting. A few of us talked a bit about the moment she asked people to stand, how powerful it was and how it was impressive that a safe space had so clearly been created during the day that enabled so many to be willing to share that fact. Justice introduced me to people who had traveled with her from Houston, making a point of telling them that I was the one to write the PS article, making more fuss than I thought warranted. A bit embarrassed by the attention, I protested, but was stopped and thanked by one of the young women. She pointed out that it is exhausting simply trying to survive and to have to tell your story, over and over, is sometimes just too much. I replied that though I felt it wasn’t much, sharing their stories is one thing I could do. We parted with a hug.

As a society, we can and should do much more. As former U.S. Secretary of Education and current CEO of Education Trust, John King, said in his keynote address, students should be able to “prioritize their education without it becoming a competition with their basic needs.” No one should have to choose between learning and eating.