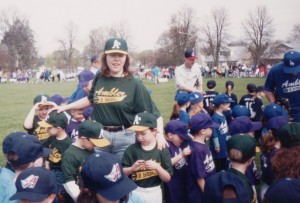 When my youngest was in kindergarten, she heard something at school about this great activity T-ball. She wanted to play; my husband decided to coach a team.  The teams were formed and we soon had a practice schedule on the fridge. This gave me the unexpected benefit of one-one-one time with my second born and when Saturday practice coincided with naptime, the luxury of an hour to myself. Despite having to adjust the dinner schedule to accommodate this new activity, this all sounded great to me. The season lasted through the spring.

Opening day in our town is a big deal. There is a parade of teams of all ages, T-ball through “majors” which ends at the ball field where all the players and coaches are treated to hot dogs and drinks. Then there is the ceremonial first pitch and some practice innings. Again, this sounded like fun. I could go watch the parade with my two-year- old and we could play at the park for a little while.

Then the regular season began and I discovered that I was expected to come watch. Really? I thought this was a father/daughter activity. But apparently I was wrong, so I went and sat, and got up and chased a two-year-old and sat, and watched children run from home to third and chased a toddler and looked up to see the outfielders all run in and crash into each other after a infield fly ball, and so on. Before long, I determined that I did not like T-ball. There were many things I would rather do, many of which I did not have a special fondness for at any time before or since. But the rest of the family liked it, so off I went to the ball field each spring. As they got older and their skills increased, the games became more enjoyable to watch, at least when I wasn’t chasing a toddler instead of actually watching the game.

When we got to the point where we had three children involved in the baseball program, we realized that having only one coach in the house was going to be a problem. My husband had successfully juggled two baseball team schedules, but a third was pushing it. Not coaching one of them was something we didn’t even consider.  I never played any sort of organized sports, but I did play baseball with the neighborhood boys on my street (most times, actually in the street). I had also sat through four T-ball seasons, so I knew what to expect.

So I signed on to coach. Because I was a little concerned about being the only woman coach in the T-ball division (there were some female coaches, for the relatively new softball division for the older girls), and also because I believe that if you are going to do something you should do it well, I spent some time preparing for the season. I researched coaching techniques and how to teach basic skills (I was a purely intuitive player – no one had taught me anything). I picked my husband’s brain and worried that I was not up to the task.

I know, this is silly, it was just T-ball. Most of the kids were in it just for something to do. But I had seen how some kids later on were missing some of the basics and I wanted to actually teach them something, not just have chaos on the diamond. One of my pet peeves was when the kids would slow down when they approached first base. (I came up with a creative solution to this. I stationed a coach a couple feet beyond the base with a sheet of stickers. If you overran the base, you got a sticker. After a few weeks, most of them had it figured out.)

This was my first experience working with a group of young children and it was eye-opening. Of course I had spent time with kids this age before, this was my third, so I knew that developmentally, these kids were all over the map.  I know that it is easier and better to learn to do something correctly the first time, that unlearning a behavior is more difficult than learning one, and that habits are tough to break. So I tried to give them a good foundation. I had two other coaches working with me and we had about a dozen kids on the team.  We managed to teach some basic skills, and learned some ourselves (such as making sure to hold the bat when helping a young player set up at home plate, then stepping out quickly, getting hit with a bat hurts). I found that being on the field with these kids was actually a lot more fun than sitting and watching.

The season went much like others. There was at least one moment when the entire infield went for the ball at the same time. A handful of kids ran to third instead of first. The shortstop would be looking at a bug on his shoe when the ball came his way. The outfielders would be watching passing planes or birds. Someone would actually catch a fly ball and he or she (and parents) would look shocked and then break out in a goofy grin. In some ways it was like being out with my own kids: constantly looking around for danger, reminding them to pay attention to what they were doing and performing the occasional head count. I still see some of these kids on occasion, and a couple of them remember that season.  For the next few years, I got used to hearing Coach Kim, both on and off the ball field, and today I find that I actually miss those days.

This was previously published at Parent.co