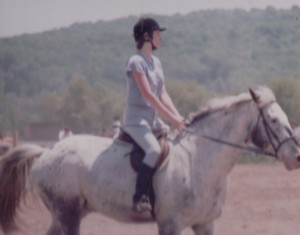 The morning of my first Mother’s Day, I opened my eyes to the sterile view of a hospital room. I hadn’t slept well, but not because my 10-week-old baby was up half the night. Instead, it was because of the moaning coming from the bed next to mine and nurses coming in every few hours to check vitals. Beeping sounds echoed off the bare walls and more moans and cries came from the hallway, from adjacent rooms.

A young girl brought me breakfast on a festive paper plate and she cheerfully wished me a Happy Mother’s Day. I began to sob. She quickly apologized and hurried out of the room.

The day before, I had been riding a horse in a grassy paddock, when he spooked. Unprepared, I was thrown off balance, landing on his neck. He sped into a full gallop as I struggled to get back in the saddle. I thought about bailing, slipping off the side, but the row of pine trees went by in a blur. “That would hurt,” I thought, so I hung on. At this point, I was sitting on the horse’s neck; the reins had fallen forward. I talked to him, hoping to calm him so we could slow down and I could get my seat back. We made another turn and I inched back into the saddle, feet back in the stirrups where they belonged. Then as the man standing on the ground reached for him, the horse turned, a sharp right, and I went to the left. Uumph! I hit the ground hard, rolled and my head gently tapped the paddock fence.

I was stunned and in pain, but not sure from exactly where. Cold  crept in shortly after I hit the ground and someone ran to get me a blanket. Soon the ambulance arrived. I was outfitted with a neck brace and body board. The EMTs kept talking to me, asking me questions. I knew that they were doing so to keep me alert. In a surreal way, I realized I was going into shock (I had paid attention in that First Aid class). I was sleepy and thought I should mention that. They kept cracking jokes and I asked them to stop making me laugh because laughing hurt.

We all have done something that looking back may not have been the wisest choice. This Saturday in May, I was 21 with a newborn. (This was not my questionable decision.) Throughout my pregnancy, I was told to expect a 6-week recovery period after giving birth. Though I overdid it, activity-wise the first few days, I quickly learned that I had to give my body time to recover. At my six-week check, I was given the clear to resume normal activities. I was free to do anything I had done prior to becoming pregnant.

One of the things I had given up during my pregnancy and missed very much was horseback riding. I had spent the past few years working at a local barn in exchange for riding twice a week. I now had a new job and my boss wanted someone to exercise his horse. There would be no mucking out of stalls or cleaning tack. He was going to pay me to ride. I jumped.

He wanted to get started right away. My helmet and boots were at my parents’ house, but I worried that if I waited a week, I would risk the job going to someone else. This was one of the worst decisions of my life. While I have ridden without a helmet and in borderline appropriate footwear before, I neglected to account for the change in my fitness level. A year prior, I was in good shape and riding regularly. I had quickly lost much of the 50 pounds I had put on with the pregnancy, but the muscle tone was not close to pre-pregnancy levels. Fortunately, a helmet was found for me, but the boots would really have made a difference.

My husband got to the field just in time to see me flying around the paddock and then fall. He and our daughter met us at the hospital where the extent of my injuries was not immediately known (in fact, it would be days before they determined I had a pelvic fracture and joint injury). An X-ray was taken, but since it was the weekend, there was a limit to the amount of tests they would run. I was admitted. My bed had a trapeze bar above me (to help me lift up when I needed to be moved) and an intricate pulley system tugging on my legs which made the pain worse. (I still don’t understand why they had me in traction.)

I got breakfast in bed my first Mother’s Day, but I ate alone. I spent the next couple hours waiting as the doctors made their rounds. There was no word on how long I would be in the hospital or what might be wrong. A CATSCAN was scheduled for the next day. I mentioned my discomfort with the traction to the doctor, who said it could be discontinued. That was a relief.

My husband and daughter came to visit later that morning. I was very happy to see them. I was able to forget the fact that I was in tremendous pain and no one seemed to know why. After a short time, my mother-in-law arrived. My husband had asked her to watch our daughter while I was in the hospital and she had made the hour-plus trip to pick her up. Though I knew she would be in good hands, I also knew that meant I would not see her every day.  I didn’t even consider the fact that my mother-in-law had left her own young daughters at home (on a day she should have been asked to do nothing) to come collect mine. I didn’t want them to leave. I was also distressed because I did not know how long I would be there In fact, I did not know if I would be getting up and walking ever again.

When my mother-in-law and daughter left, my husband went with them to move the car seat and transfer my daughter’s things. I felt incredibly alone. This was not how the day was supposed to be. Our plans had been to visit our mothers and celebrate both Mother’s Day and my uncle’s birthday. Instead, I was lying in a hospital bed, having had my daughter taken from me on the first holiday I got to celebrate as a mother. Instead of hearing her happy sounds, I was subjected to moans and cries of pain from the adjacent bed and nearby rooms. I worried about what would happen if my injuries were permanent. My impulsiveness could have cost me dearly.

Though it took a while to get a diagnosis, it could have been much worse. My injuries would heal, but it would take time. My first attempt at walking again with the physical therapist was frightening and painful, but I was back on my feet and fully cleared for regular activity within eight weeks. I did get back on a horse that summer and was surprised at my apprehension. (I was on the gentlest, most easy-going horse I knew.) Other circumstances kept me away from the barn which has since been sold, but I have ridden once or twice since then and hope to soon return to riding regularly. Though the negative memories have stuck with me, I can’t shake the longing to be in the saddle, especially this time of year.