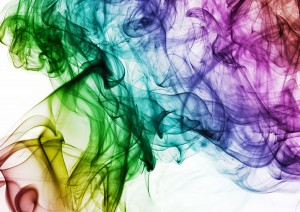 When I was in college, I answered an ad for a sales job and was hired to sell Rainbows. Putting it like that, in hindsight, that should have been my first clue. The fantastically-named Rainbow was a home purifying system that looked an awful lot like a vacuum cleaner. All sales were done through in-home demonstration.

I went to the interview and then the sales training, which was, for the most part, sitting through the sales pitch. It was an amazing machine. So amazing in fact that although I gasped at the sticker price, I believed that I could sell it. My fellow trainee, however, dropped out once she heard the price.

The premise was that the dirt in the carpet, furniture and even the air would be sucked into the machine, then trapped in the water in a basin located below the machine. This eliminated the problem of having dirt escape and efficiently trapped that last little bit of dirt inevitably left on the floor when sweeping. Using the included attachments, one could use the Rainbow to dust surfaces as well.

I signed up and got my demo machine. There was no cost to me and a promise of commission on sales. I also joined at a fortuitous time, as there was a contest of sorts going on with a bonus of silver bars and an invitation to a party to the top seller that week.

As with most demonstration sales, I was on my own for my initial sales visits. These were carefully described to me as being “practice” and I was told I should ask my family and friends to help out. The idea was that I would be more comfortable with familiar people and would gain confidence to sell to strangers.

My first demo was to my grandmother who unbeknownst to me, had decided she was buying the machine before I even walked in the door. She very patiently sat through my presentation, oohing and aahing appropriately and seeming to be fascinated by my every word. When I finished my pitch, she said, yes she was going to buy one. Thinking I had won her over with my dazzling sales ability, I tried to protest, given the price. There was no deterring her, she was buying one.

My next stop was my parents. My mom knew my grandmother had purchased one and thought she was being overindulgent (as she had a tendency to be when it came to her grandkids). By the end of my pitch, Mom was looking at my father with eyes that obviously said she really, really wanted one of these. (My mother has been known to have a fondness for efficient vacuum cleaners.) And so I had sale number two.

Then I took the amazing machine to my mom’s aunt and uncle, where I demonstrated the machine’s ability to clean furniture cushions so well that there was a notable difference in color, so that I offered to clean them all for them. They were interested, but the cost was prohibitive. Another demo was for my cousin and his wife, who liked it well enough, but were not buying. With each demo, I was required to call the office at the completion to inform them if there was a sale. After my cousin said no, my manager insisted on talking to him and went for the hard sell, to the point where it was offensive. This is when I decided I was done with demonstrations for family members. My next call was a lead from the office.

It was policy to only do a demonstration when both members of a couple were present (to avoid losing the sale due to one person not having financial decision-making power). In this case, the husband was not home, so I followed protocol and called the office. I was told to go ahead with the demo. At the end, predictably, the woman said she could not make a purchase without talking to her husband, so that was what I had to report back to the office. A different manager answered the phone than I had spoken to and I got an earful.

That was the end to my career selling Rainbows. I refused to subject myself or anyone else to that treatment.  As it turned out, I was the top seller that period, but I never did see those silver bars or anything beyond my commission check for the two machines. The pay wasn’t bad, but the lesson was invaluable: something that seems to good to be true likely is.