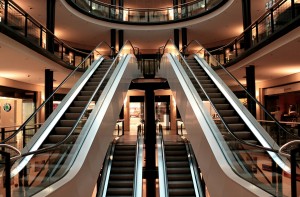 Although I didn’t know there was a name for it, apparently escalaphobia really is a thing.  As a child I was responsible for shutting down an escalator, not once, but multiple times.  For reasons unknown, my shoelaces were particularly good at getting stuck in the moving stairs, causing panic when it was time to step off them. I remember worrying that my foot was going to go with the lace, around the bottom of those slow moving steps and back up to the top. (A recent news report on a child’s injury when a plastic shoe got stuck reminded me of this and made me think that perhaps my fears were not completely unfounded.)

Understandably, this caused me to be ultra-conscious as a parent. I made sure my kids shoes were tied before getting on (made easier by the invention of Velcro-closures on shoes) and made sure their feet were not up against the sides. I am happy to say my kids never shut down an escalator.

I had finally put my childhood fears behind me and have traveled on hundreds, maybe thousands of these moving stairs. While transferring between planes at Charles de Gaulle airport in Paris, my fears all came back. In this instance, we were packed tightly on the “Up” escalator along with other travelers, most of us carrying suitcases and duffels. We suddenly realized that though our feet were moving up and forward, our bodies were not.  For some reason, someone at or near the top had stopped. 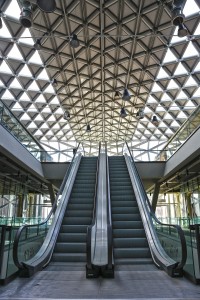 My husband, being a quick thinker, realized what was going on and had a solution. He called out for everyone to walk backwards in order to keep us all upright. It was a brilliant idea, but we are English speakers. We know a smattering of other languages but not the words necessary to convey this idea.  Many people on the escalator spoke other languages besides English and French (which of course is not uncommon in major international airports) and did not understand. I sensed a general panic about to break out, then slowly, we started to move forward.

When we reached the top, we discovered what had happened. A woman had fallen getting off the escalator and those behind her had little room to maneuver around her. Of course some stopped to try to help and further blocked the walkway. Unfortunately, the moving walkway didn’t get the memo and kept pouring people around them.

Crisis averted, and certain that no one was hurt, we moved on to our gate and continued our journey. I was relieved and thankful that my fears were unfounded, but frustrated at how long it took to get help. Our flight was uneventful and as is often the case, it was nice to arrive home. Until we approached the escalator. Panic again set in, but here I had a choice. Alongside these escalators is a set of stairs which at this point, no matter how tired I might have been or how heavy my bags, was the only way I was willingly going to the floor below. 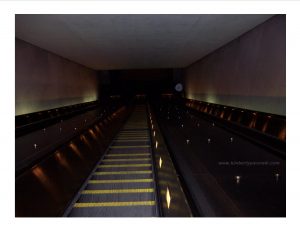 One of the longer escalators in the Washington DC metro system

My escalator phobia continued for some time after this, much to the amusement and frustration of my family. It diminished gradually, first I could handle those that were mostly empty and then, with trepidation, those with people on them that were going up. Though I once again am mentally able to take the lazy route of moving stairs, I still often choose actual steps if it is an option.

One thought on “My Escalaphobia Was Temporary But Very Real”