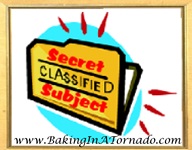 My “Secret Subject” is: What is your biggest fear?  What do you do to overcome that fear? (submitted by: http://batteredhope.blogspot.com)

I am a fairly confident person. I don’t really scare easily. Over my lifetime I have had a few little completely irrational fears (such as butterflies and escalators) and have written about them. As a child, like most I feared the dark. Though I sometimes show more caution in dark spaces, darkness no longer scares me. As has been the case before with these writing challenges, this week I have been asked to step outside my comfort zone and share something most people don’t know.

Although many fears start in childhood and end up either overcome or hidden away, my biggest fear arrived after I became a parent and is actually a fear of death – more specifically, a fear of  dying before my children were grown, when they most needed me. As they got older, my fear has been transformed into a fear of outliving them.

Though I have not directly experienced anyone close to me losing their mother young, I do know a few people that have had to grow up without their mother there to guide them. (To clarify, I met these people as adults, as opposed to being part of their early lives.) I know things were more difficult for them because of this loss but I suppose I mostly got the sense of what it would be like from reading books (as a kid I always had a book nearby). Being close to my mom, I knew the reality would be difficult. I can’t imagine life without her and couldn’t stand the thought that my kids might ever have to face childhood without me there to protect them (as much as a mother could) and to cheer them on.

I suppose that this fear shaped my life decisions to some extent. For two decades, I played it safe. Though not completely risk-averse, I carefully considered some activities before deciding if they were worth the risk. Though it is an extreme example, skydiving is on my bucket list. This is not something I would have even considered actually doing when my children were small. At this point, it is simply time and financial considerations holding me back. (I want to learn how to do it properly and go solo, not just a single tandem jump. At this point, the cost/benefit ratio simply doesn’t work for me.)

While this fear did not control me, I did think about it when traveling without my kids, either with my husband or alone. On my first solo flight as a parent, I dozed off. I jolted awake when I felt the plane start to descend. I had seriously misjudged the time and assumed we were crashing.  My first thought was about my kids who were small at the time. Fortunately I realized that we were in no danger but were actually approaching our destination before my fellow passengers were aware of my thoughts (then I would have died – of embarrassment).

Now my kids have reached the point that I know they will do okay without me.  I’m still an active presence in their lives and my advice and hugs are still sought out, but I am not as essential as I once was. So now my greatest fear has transferred to the unmentionable thought of outliving them.

Parents are not supposed to bury their children. Doing so contorts the natural series of events. This pain is one I have seen firsthand. I know a family that lost a child to a tragic accident and someone close to me lost a baby late in her pregnancy. Though I did not know them personally, there also have been children in my community taken too early, through accident, violence or illness. I don’t ever want to be in the situation those parents were forced to deal with. I’m not sure where the strength comes to cope with it and move on.

This fear has caused internal conflict at times. My instinct is to protect my children. However I have to balance that with allowing them to grow, which entails a certain amount of risk. I want them to grow up and out, to establish their places in the world. And that is my dilemma. I want to ensure they have the opportunity to grow and thrive. While I feel the need to protect them from a certain amount of risk, I have to do so without holding them back.

So how have I learned to deal with this fear? Faith and prayer. Like many moms, my children are always in my prayers. (I say a few extras when they choose activities that seem riskier than usual.) I can give advice and sometimes prohibit risky behaviors (I still have the power to do that on occasion), but for the most part, I am powerless. It is really up to them and God. They have the power to make decisions, and God of course wields the most power of all. I have to have faith that all will end up as it should.

I hate feeling powerless. Prayer is my only way out of feeling this way. Though I know some scoff at the idea, I have seen the power of prayer in my life. It works. It’s the best method I have found to calm fear.

Here’s the list of other bloggers participating. Pop in and see what subjects they were given to write about.