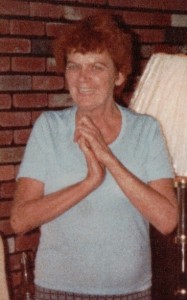 Nov 28 – imagine an ancestor had internet and social media

This is something I have actually thought about before. Though Grandma was certainly literate (having been an avid reader when she was younger), I think Facebook and social media in general, would have been an interesting challenge, to say the least. Grandma had some of the latest gadgets while I was growing up ( a VCR and cable TV quickly come to mind) but she had some difficulty using them. Basically, there were too many options on the remote. She subscribed to her aunt’s theory that “Something that is good for everything is good for nothing.” Once things were set up, though, I think she would have enjoyed the platform (provided she had a way to access it that required a single on/off button).

The abundance of news stories would provide much in the way of conversation starters. As a kid, I remember she made sure each week to buy The Star and The National Enquirer newspapers; much of the faux news available online is comparable. Fortunately, she did not believe all of this, but enjoyed it for its entertainment value. I imagine her howling with laughter at some of the YouTube videos being passed around and fidgeting uncomfortably at some of the more inappropriate content sometimes shared. (And then sharing some of the “dirty” stuff herself.)

Being able to see photos of far away family would be a welcome treat and I think she would have really gotten a kick out of Facebook live (though probably only watching it, unless someone was with her to help film). Having these digital albums at a moments notice would have been a special treat.

I am certain that Grandma would have more Facebook friends than I do, possibly even more than her great grandkids. She was extremely popular, especially among the younger crowd. I am sure that she would comment on those men she found good looking (as she did in real life) and she likely would have attempted some matchmaking if anyone she cared about was not in a relationship. I think that perhaps her online presence would be a little tamer than her in-person one; there is just something about telling people what you think in writing that is a little intimidating (and permanent). I am certain though that she would find it difficult, if not impossible to be anonymous.

I would be interested to know her thoughts on the technology of today. Though she struggled to use some of the newer devices, she considered them advances. She was amazed by early computers and the way so many everyday items became “smarter.” Grandma on Facebook is something I would have liked to see.