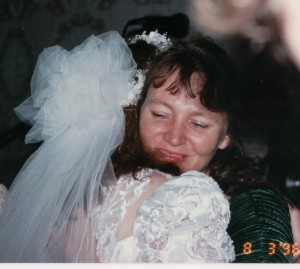 Nov 27 – record a memory to pass down

My sister’s wedding day includes a memory I will always hold close. She honored me by asking me to be her Matron of Honor, which meant it was my job to hold her flowers, adjust her train and keep passing her tissues (I never saw a bride cry so much).

I also took on another job, one that she did not know about. After the beautiful ceremony and our trip to the beach (in heels I was not used to wearing) for photos, it was time for the reception. Things went along according to plan and then the band leader announced that I had something to say. The look on her face was priceless. This was not in the plan. She looked puzzled and perhaps concerned? I took the microphone and explained that there was a surprise for her and my new brother-in-law. Many of the guests had worked together for a special gift for them. This was a gift that would be sure to warm their hearts for many years.

Months before, I had sent squares of fabric to family and close friends on the guest list, asking them to decorate it for my sister and her fiancé and to return it to me so that I could stitch the pieces together to make a quilt. Most people were eager to participate and I had enough squares to make a king-sized quilt. This was our surprise.

I explained what we had done as my husband and my sister’s best friend and bridesmaid unfolded the quilt behind me. My sister came forward and I hugged her; it felt very much a private, personal moment. Then I noticed that a hush had come over the room. No one was talking. I turned around and most of the guests were on the dance floor, slowly moving forward to get a better look. The moment was magical, better than I could ever have expected. Gradually, the sounds in the room resumed as people noticed their own square and commented, or saw what others had done with their squares.

Soon someone made the decision to drape the quilt over a grand piano in the adjacent room so that guests could take look at their leisure and the party went on. This was a brief moment, but one I remember vividly, though it has already been 20 years.