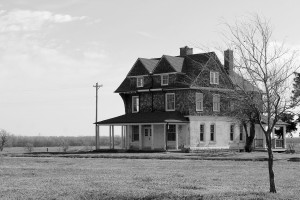 Nov 26- pitch a movie about an ancestor

My great great grandparents moved from Scranton, PA to Oklahoma and back to Scranton during the 1890s. They were enticed to travel the almost 1500 miles through the promise of either employment or land (or maybe both). The journey would have been difficult and certainly costly.

Since he was a miner, it is likely that he continued in the same line of employment in their new home. They interacted with other immigrants (as both my gg grandparents were) as well as Native Americans. There were conflicts about mine ownership and labor issues. The climate and terrain were different from any they had experienced previously. After a few years, they decided to return to PA, with their young daughter (who was born during the years they lived in OK). The journey home was likely as difficult as the one there, perhaps more so since they also had a toddler in tow.

A movie about their journeys and experiences would be historical in nature, but not a documentary. I envision a cross between Little House on the Prairie and Far and Away with a bit of controversial action regarding the mines and labor issues. The relationships between the natives and the European immigrants, both good and bad, would also be addressed. The stark differences between their two homes would be accentuated by the visual images. It is unlikely that they would have spent several years there without experiencing some bad weather. A tornado would have been a terrifying experiences for a young couple from Wales.