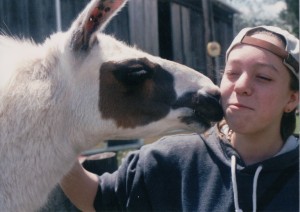 When our kids were young, my best friend and I spent a week away with her three kids, my four, plus my niece (two boys and six girls in all). The boys were attending a ranger program at the nearby state park and while they were occupied each morning, we took the girls on other outings then the whole group out in the afternoons. By mid-week, we were running out of things to do with the girls.

We wandered around town, stopping in what is often described in this area as a “junk shop.” We casually perused the odd assortment of used items, sometimes exclaiming at our finds when we spotted some forgotten item from our childhood or when we couldn’t quite figure out what something was. There were only a few other people in the shop, including an older couple who keep looking our way and finally couldn’t resist asking about our little gang. (It was of course apparent that we “weren’t from around there.”) The gentleman, Don, wore a cowboy hat and invited us to their home to see his playhouses. The conversation continued, and it was apparent he was serious about us visiting, even telling us how to find his home. He wanted us to come by on Friday. We agreed. 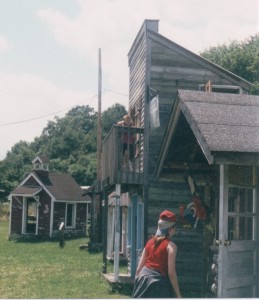 The plans called for our husbands to join us for the weekend, but this changed over the next day. My friend and her family needed to return home Thursday, as did my niece. My husband was still arriving Friday, so I planned to keep my word. Though he was skeptical, he agreed we could visit Cowboy Don and his wife.

The directions were accurate and we drove under the sign announcing the property. At the end of the drive were the “playhouses” small scale replicas of an Old Wild West town. A general store, a church, a police station and a saloon were all  perfectly-sized for young children to play in and contained some props and costume pieces as well. As we pulled up, the couple came out, visibly surprised and pleased that I had kept my word. Not only did the kids get to play in the town, they also got to meet the barnyard animals, ride a horse (walked on a lead by Cowboy Don himself) and get their first llama kisses from Babe, the resident llama. We got a tour of the barn, which included Don’s impressive collection of cowboy memorabilia, including old movie posters and some signed and framed photos. Before letting us leave, they insisted on giving us all ice cream and asked us to come back anytime. 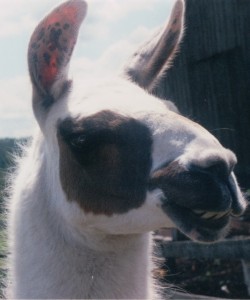 We never did make it back, but still occasionally reminisce about the visit. After all, you never forget your first llama kiss.