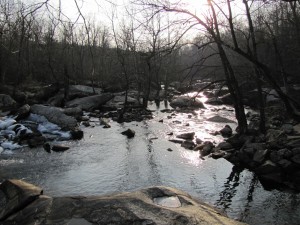 Recently, my genealogy research prompted me to look up one of my childhood homes online, which then led to a conversation with my mom about my early memories about my younger years. This got me to thinking about my earliest memories, which I realized are mostly related to the outdoors. We were not an outdoorsy family, so what does that say about me? Unlike the rest of my family, I have always been drawn by nature (prompting my sister to question if I was adopted; I wasn’t) and as an adult, find comfort in the outdoors. When I feel beaten by life, a walk in the woods somehow makes it all bearable.

My earliest memories are of the house we lived in when I was three. I mostly remember the backyard. We had a towering walnut tree in the center of the yard, which dropped an abundance of playthings for me. I had a baby carriage which I pushed in said yard, though I have no memory of it ever holding a doll. It did hold the family dog (when she would allow it) and was used as a container for the walnuts I enjoyed collecting. This tree was a very welcoming one, yet somehow my parents and the neighbor who called to tell them I was sitting at the top of it, didn’t appreciate its attraction. (Remember, I was THREE.) I also remember the basement of this house where I once brought a bucketful of frogs I had gathered from the muddy backyard on a particularly rainy day. (I remember that was not particularly appreciated either.)

I remember the move to our next home, when I was four. The house had two front doors, which I questioned when we drove up to it for the first time. (It was what I now refer to as a “twin,” a two-family house that shares a common wall.) My most vivid memory here was a certain Sunday, after church, going out back to play. (I know it was after church because I was wearing a dress and patent white Mary Janes, which I could only be convinced to wear for church.) I was friends with one of the neighborhood boys my age and we went exploring. We spent what felt like the entire day running through yards, over fences and along a “crick.” When I got home, muddy and tired, I got an earful. I was worried about being in trouble for having muddy shoes, but apparently the big issue was scaring my parents by running off without them knowing. (As a parent, I now get this.)

My other early memories center around books, mostly being read to by my mom. This love for books is also something I have never let go. My sister was also read to, yet she does not have the compulsion to always have them around that I do. (In fact, when you look at how different the two of us are, it is surprising that we grew up in the same household.)

From the age of five or so, I have a multitude of memories: of homes, friends, school, and events. From talking to others, I understand that this is common; few of us have a large number of memories from when we were very young and most people seem to remember their lives from about the time they enter school.

This all got me to wondering if lifelong interests and tendencies are perhaps innate, something we are born with rather than something we pick up along the way. Do our early childhood events shape our future interests? Do we remember certain things because we now have an interest in them or are those interests so much a part of us that they have always been present?

How about you? Are your earliest memories relevant to your life today?