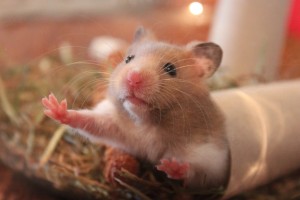 For years, one of our children had been requesting a pet rabbit. Having had a pet rabbit as a child, I knew the care required to keep a rabbit healthy and so I was very aware that it wouldn’t fit it with our lifestyle or our home. So the answer was, repeatedly, no.

As spring break approached, another child’s teacher had put out a request for two families to care for the class hamsters for the week. A weeklong obligation was manageable and, having had hamsters as a kid, I knew the care required was within reason. So, I said okay. My daughter was thrilled and happily went to school to notify her teacher. When she came home that day, she asked if we could take both hamsters, as no one volunteered to watch the second one. The teacher said they could share the cage for a week, so the second would take up no additional space. This all sounded reasonable enough, so again, I said yes.

Spring break came and was mostly uneventful. The hamsters had a few squabbles, but mostly got along fine. Each got some hands-on time (which actually made things easier since all the kids could have some time) and things went smoothly.  A couple weeks later, my daughter burst into the house after school and announced that the class hamster had babies and that they would need homes.  Of course this was followed up with “Can I have one? Pretty, pretty please!” This question was not as easy to answer. Pets are family members and come with responsibilities. They need their own space and someone needs to dedicate time to feeding, cleaning and socializing them. I replied with a definitive “I don’t know. We can talk about it.”

I went over the responsibilities in caring for a pet, stressing that animals can’t take care of themselves and that it is unacceptable to forget things when you are dealing with another life. She insisted that she would take care of everything – she would feed it, give it water, clean the cage, and play with it. I told her we’d have to talk to Dad as well.

That night, I talked to my husband, arguing that we were in part responsible for the appearance of these little ones, and agreed that I might be the one ultimately in charge of its care. It was decided: we would become hamster owners. When the babies were old enough, one came home and a name was needed. As part of the deal of allowing the new pet, the child who was responsible for the encounter was deemed to be the pet owner, which came with care responsibilities, and also naming rights. What did she go with? Rabbit. To this day, I am uncertain whether this was a dig at the sibling who was not allowed to have her desired pet, or in honor of it. (To be honest, I think it was just a funny thought, and it stuck.)

The experience was overall a positive one. Reminders were sometimes needed, but the care went mostly as promised. Hamsters don’t have very long lifespans and I actually found myself missing the critter after she was gone. This time, it was all on me. I made a trip the pet store and Rocky joined our family  Our lives do not currently fit with this sort of pet, but if things change, I wouldn’t rule another one out in the future.