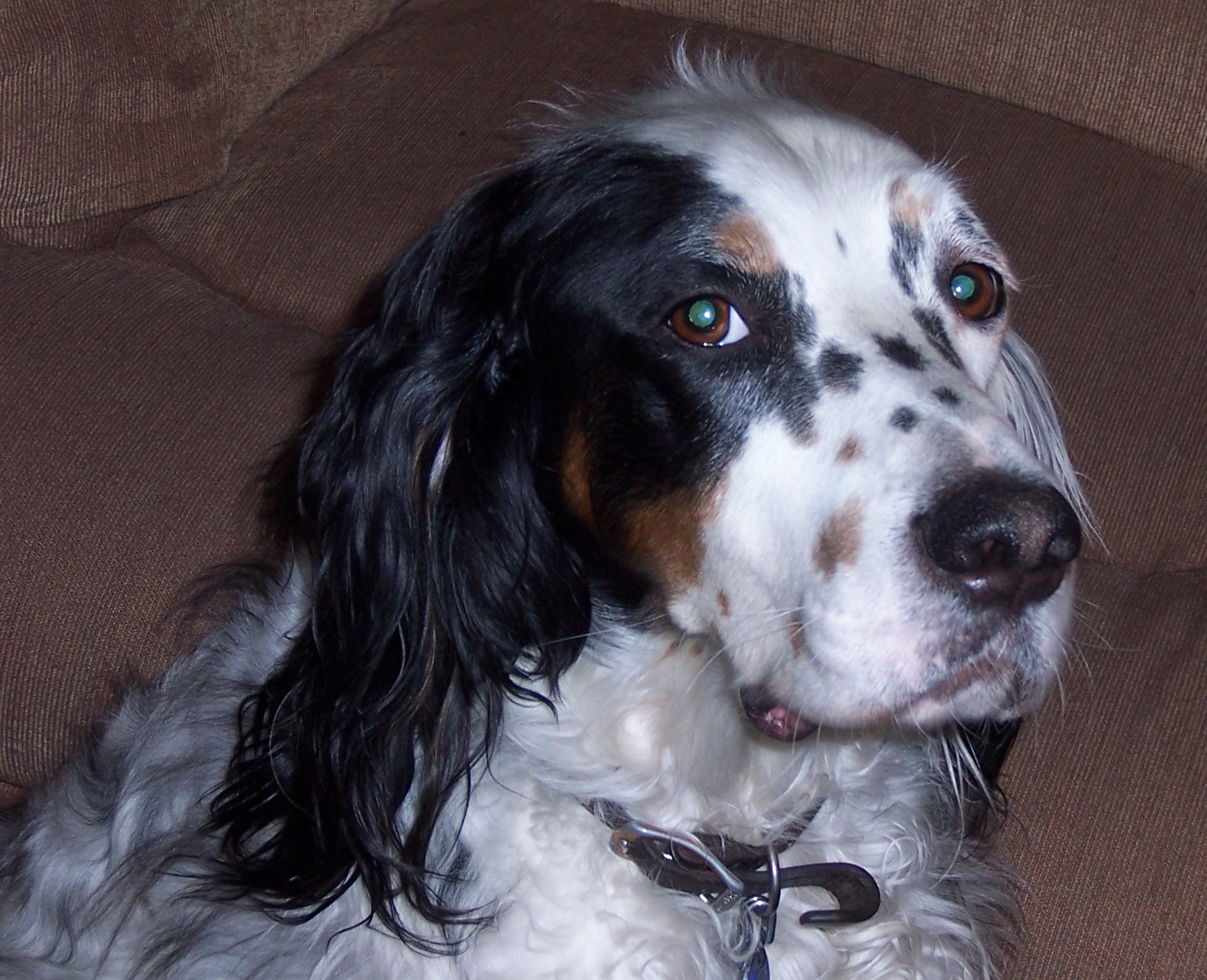 It was ten and a half years ago that we rescued each other. I had been in a dark place for months, since the death of our prior dog, who had helped me teach my four children to be kind and compassionate, while being more patient than any living being ever should. My youngest was in kindergarten, so the emptiness in the house was amplified. He was skinny, snotty and quiet, with some of the kindest, gentlest big brown eyes I had ever seen.

The day we met, I noticed that he had been freshly groomed and asked if his coat was naturally short on his back, or if it had been trimmed. The woman holding the leash lied. She was obviously desperate for him to find a home. She told us of her own English Setter, Jack, and how she would take this one home too, if she could. I think we both knew that that day was likely his last chance. He was seriously underweight and had an upper respiratory infection that could not be hidden by a bath and haircut. He leaned into my leg and looked up at me. I was hooked.

At home, he was afraid of all sorts of things. He didn’t know where to go, and when I took the broom out to sweep the floor, he ran, looking for a place to hide. He had clearly had difficulties in his life, but he was gentle, trusting and affectionate. We took a family vote to name him and settled on Zeke. After two weeks, his upper respiratory infection was clearing up and he was starting to put on weight. Since there was a clause in our adoption contract indicating that the owner had 90 days in which he or she could reclaim the dog, I took pictures of him in his pitiful skinny state as insurance that he would not be taken from us and returned to a neglectful home. I had my case planned out in the event there was such a claim. I was not giving him up without a fight. Secretly I was terrified that I might lose him.

We took daily walks, though many in the neighborhood asked me who was walking whom or referred to it as him taking me for a drag. He loved meeting people and dogs and would walk as long as I would allow. Our daily walks were frequently a mile or so, some days over two. If I was having a particularly stressful day, he would walk over to me, put his head in my lap, and look up, expectantly. He knew, even when I didn’t, that I needed to get out and de-stress, so we would walk again. The days I didn’t feel like walking, he made sure we went anyway. He was relentless as a personal trainer.

We became known in the neighborhood. I caught occasional comments about the lady with the big white and black dog. Kids asked me if he was a Dalmatian. People would sometimes stop their cars to ask me about him or to comment on how beautiful he was. A neighbor I had never really spoken with spent about 15 minutes telling me about how his dad had raised Llewellyn English Setters and how great the breed is, of course adding that Zeke was a beauty. When small dogs were intimidated by him, he would lie down and let them climb on him. He would stop for any child who wanted to pet him. He once “saved” me from a confused baby squirrel that ran up to us and over my foot, scooping it up in his mouth. After a quick, “Leave it!” from me, he set it down. It shook off the drool and scampered away.

Last year in 4H, he got his Canine Good Citizenship certificate. The woman giving the test commented on how wonderful my daughter handled him and how she thought they would do well in the show ring. Seeing him run, tail and leg feathers flowing, was one of my favorite sights, the one I have missed the most in recent months.

Zeke always loved to travel. Despite his size, he could curl up in a bucket seat without hanging out of it. He would get excited when the camping gear came out and was obviously disappointed the times he realized he would not be going. When the travel harness would go on, he ran straight for the van. Trips to Florida were a bit challenging, but he was no more difficult than the rest of us. The destination didn’t seem to matter much to him, he was happy going to the dog park, the vet or to go pick up one of the kids from school.

He was a momma’s boy. He was a family dog, but he was always by me. We got another dog and he willingly shared everything, except me. She gradually took over as alpha dog, and he easily conceded, with the exception of his favorite place – next to me. She begrudgingly accepted this; all he had to do was look at her and she would move so that he could sit at my feet. He was always happy to welcome us home, no matter how long we had been gone, but there is not a video out there of a soldier’s return that depicts a dog more excited than Zeke when I came home from a long weekend or the occasional week. When he was really excited, he would jump straight up in the air on all fours (much like a cat) and his barks became a soft, “Roo Roo Roo.” He was very much a “talker.” He was a wonderful snuggler and despite his size, also a lapdog. If I sat on the floor, he was in my lap.

In recent years, for a number of reasons, our daily walks fell off. Several months ago he started having trouble walking and eventually even standing and was unable to make it around the block most days. For the past couple months, I realized he still acted as my personal trainer. New exercises were added to my daily routine: squats (to hold his bowl at the right height for him), lunges (to catch him when he was going to fall) and weight lifting (when he just couldn’t make it up the steps on his own). One big difference was that now I was the one suggesting we go outside and walk (just around the yard since longer walks were too taxing). Sometimes he was reluctant, but as always, he would do almost anything to please me.

The past month or so showed a dramatic change in my “puppy.” His once deep, booming bark became a raspy one, his legs became unreliable, sometimes about as useful as those on a ragdoll. On Friday we got the dreaded news that he did not have the neuromuscular disorder we had hoped for (as twisted as that sounds) that could have been treated with medication and given us considerably more time with him. It was telling that he continued to lay at my feet when I got this very bad news; just months earlier, he would have had his nose in my face, asking what was wrong, telling me I needed to go for a walk to feel better. Instead, he lay there, not even picking up his head. In a way, this made the impossible decision a little easier. He was hurting. The vet said it was likely a brain or spinal tumor. I believe my Zeke was holding on to please us. We will all miss his presence in our daily lives terribly, but we will find our “new normal” and carry on. He will never be forgotten, he was just that special kind of being. I hope that where he now, he is running and jumping and really barking, with the occasional “Roo, Roo, Roo” thrown in as well.

One thought on “Time to Say Goodbye”