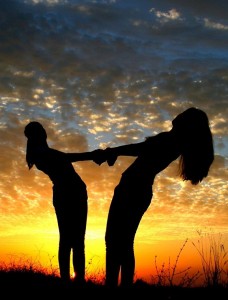 “Family” is a powerful word. It conjures up many images and evokes many feelings. It can be defined in various ways. Obviously, we are all born into a family. Most of us stay in that family, others become part of another family at a young age.

Then there is the family that we have with whom we share no genetic ties. This can be our choice in life partner and his or her family, who then also become our family. So far, this all makes perfect sense to most, but beyond that there are relationships that I have discovered some people really don’t understand.

Those of us who are truly lucky have others whom we consider family – close friends with whom we spend enough time that, when out in public, people assume are related to us based on the way we act. Those people whom we could not imagine life without; we just know they will be there – no matter what. Many of us have friends like this, those whom our children refer to as aunt or uncle. In my family (the biological one I was born into in this case) we have another whole family we refer to as aunts, uncles and cousins, just because it is simpler than trying to explain the origins of our relationships (and better explains the emotional ties we share).

Having four (almost) grown children with friends floating in and out of our house, and being a Girl Scout leader for more than 10 years, I also have grown attached to other children who have come into my life, ones that I would protect at all costs, as if they were my own. I am happy at their successes in life and worry about them when they are struggling. I am especially thankful that they let me into their lives and allow me to share their joys and sorrows.

Given how much non-biological family I have, one would think that I would not be surprised at how quickly another person could join this group. This morning I said goodbye to a teenager from France who spent the past week with us and almost felt like I was sending one of my own daughters off. We had a wonderful week, and I realized a couple days ago that I would miss her when she left, but it still caught me unawares.

I speak almost no French (I do like French food, so I know a few words). Our guest spoke some English, but we had a few hiccups as far as communication went. We played a bit of charades and at the grocery store, we did a bit of pointing at assorted items, and she giggled as we got her samples to try from the deli counter to decide what to buy for lunches. On both sides we frequently had puzzled expressions, then smiles as understanding struck. Overall, I think we got by just fine and enjoyed the week that went much too fast.

I feel privileged to have spent time with a few of the other visiting students as well and enjoyed watching the dynamics of two cultures coming together and sharing experiences. I saw girls who previously had only communicated via email and Facebook now sharing stories, jokes and smiles, like sisters. In conversations at our group farewell dinner last night, I learned that other parents had similar experiences as they joked about wanting to “adopt” these kids.

I also enjoyed the sense of order we had this week. Having a house guest somehow makes a difference in the “tidiness level” of the house. Things were put away with more regularity. Mornings went a little bit smoother. The week was virtually stress free (I guess this may be a bit unusual for having a house guest), though by mid week we were all going to bed a little earlier. We established a routine of sorts, even the dog greeted her each morning for a pat on the head and then again in the afternoon. Only the weather was uncooperative.

This morning was a little sad. Tomorrow will be different, like before. We will be a little less busy (just a little) and will speak only in English (well, that and the combination of other languages that frequently drift into our conversations). However, we will also be different because of this experience. I believe that we are touched by many people we encounter in our lives, which changes us in some way, forever. This is a good thing.

I know that the girls will keep in touch, at least for now (Facebook is wonderful for things like that) and hope that our paths will cross again.