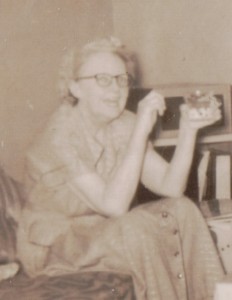 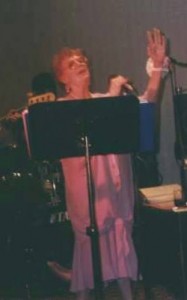 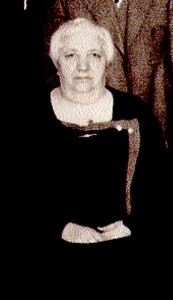 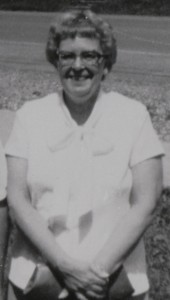 When I grow up, I want  to be the kind of old lady that many families have, the one that is slightly eccentric and well loved, the one who is not afraid to speak her mind and exudes confidence.

I have several such ladies in my family tree and I hope to have the fulfilling lives they did. On my mom’s side, I have my great great grandmother, who cleaned in the nude, my great Aunt Betty who rubbed shoulders with Florenz Ziegfeld and Al Capone and my dear grandmother who drank like a frat boy, swore like a sailor and loved more and better than any other person I have ever known. On my dad’s side, my great great grandmother found a way to move her entire family from Italy to the U.S. and was the undisputed head of the family even after her children were grown; my Aunt Marie traveled and dispensed advice to the younger generations with poise and class. My husband’s family had a lady or two like this as well. His great Aunt Mary had spunk to the end and insisted on living her life her way, without compromise or apology and his Aunt Helen was independent and a little sassy; she told it like it was.

These are the women I admire. They had spunk and sass and it only seems fitting during Family History Month to remember them and their contribution to our lives. I never knew my mom’s great grandmother, but her stories live on. She had the gift of sight and had married multiple husbands (the exact number has yet to be determined as her records have so far been elusive). Each worked in the coal mines and she correctly foretold they would die there (making one wonder why the latter ones didn’t they get the hint).

I remember my great great aunt Betty, my grandmother’s mother’s sister. She died when I was young, but I spent a significant amount of time with her; she stayed with me when my sister was born as well as certain occasions when my parents had to travel. She also came for extended visits. She looked exactly the same all the years I knew her, with the same curly blue silver hair and glasses. When her health began to fade, she lived with us for a stretch before moving to another relative’s house shortly before her death. Though I was too young to remember much of what she said (and too young to understand her stories that have been relayed to me since then), I remember her as a gentle, loving presence in my life.

I couldn’t possibly say enough about my grandmother. She was unlike any other grandma I knew and all my friends agreed. Forced to be a single mom when her three children were young, she was a working mom in an era that made her a rarity. She held an assortment of jobs and at some point landed a singing gig at a nightclub. She had an amazing voice and sang at most family weddings. Though the band for my wedding hesitated, I let it be known that saying no would be a dealbreaker, so they relented. They weren’t sorry. She loved her beer and though most of us looked at it as a flaw we could overlook, many young men were impressed and many a boy proved himself wrong by saying he could outdrink her. Despite her flaws, she loved passionately. She showed me the meaning of unconditional love. She may have gotten angry with me once or twice, but I never for a second doubted that she loved me.

My dad’s Mamanon’, another ancestor I never had the fortune to meet, was apparently a formidable woman. The family story is that when her only daughter was to be married, her fiancé sent money for her to travel across the Atlantic to America. Instead of sending her daughter, Mamanon’ sent one of her sons. This was repeated a couple times, until her soon-to-be son-in-law got the message and sent for the rest of the family. Once here, she settled in and made sure that her children behaved in a way that she deemed proper. It seems that none of them made major life decisions without consulting her.

My Aunt Marie was a sweet woman who exuded class and charm. I saw her regularly, at family events and sometimes she would stop in when we were visiting my grandparents. Actually my dad’s cousin, she was a generation older than he and all the younger cousins referred to her as “aunt.” She never married or had children of her own, but was kind and generous with her time. She always made me feel that my thoughts were important and never shooed me away as so many adults do to small children. I remember her always having perfectly coiffed hair and meticulous, stylish (yet age-appropriate) clothes.  She taught me to dance the Tarantella and it was obvious that to her, family was of prime importance.

I didn’t get to know my husband’s Aunt Mary very well, having only visited a couple times before her death, but she had spunk. Despite being a tiny woman, there was no chance of her going unnoticed. Her funeral was one of the most unusual and uplifting ones I have been to. Instead of the chairs in the funeral home being arranged in rows, they were up against the walls, so that everyone could see each other. The time was spent going around the room and sharing memories. That is the kind of send-off I want.

Aunt Helen was family through marriage, but also by choice. Here was a woman who lived traditionally, yet made her own personal mark. Her husband died too young, but she went on and lived a full life. She was involved in her church and community and was skilled at domestic pursuits such as cooking, canning, sewing, knitting and crocheting. She was a wonderful conversationalist and told colorful stories. I grew to love her more each time I spent time with her. One of my regrets in life is that we ran out of time. My children were small and I was busy with their lives, so I didn’t get to spend as much time with her as I would have liked.

When I am old, I want to be a character. I want to be the aunt that tells good stories, the mom that reminds kids to live their lives, perhaps someday to be the grandma that loves so incredibly much that you know it, even without being told (though rest assured, I will be telling). I look up to these strong, independent women and hope that I can make them proud.