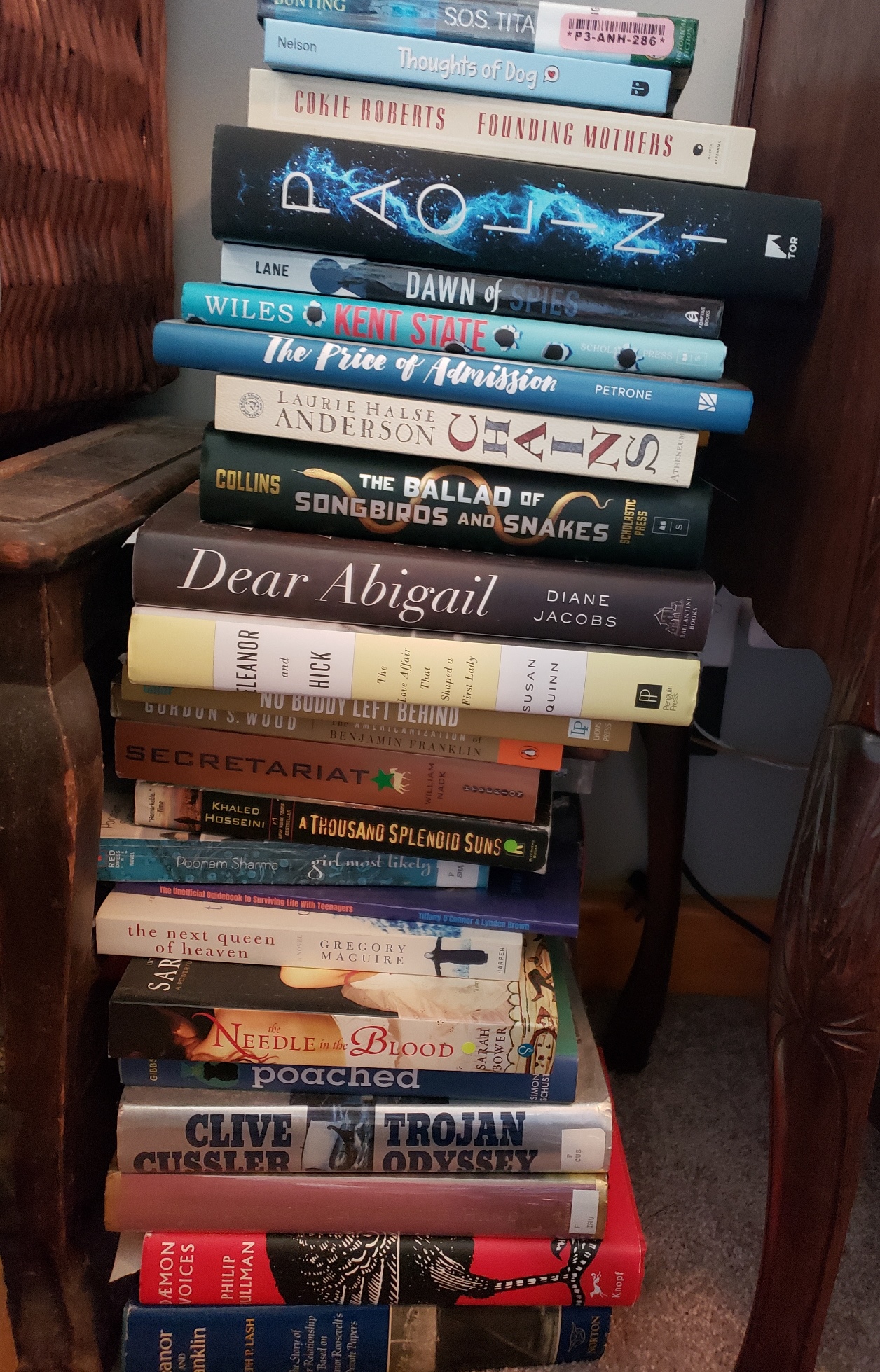 I don’t remember a time when I didn’t love books. Practically from the time I was born, my uncle ensured I had a ready supply and my mom read to me every night, even after I learned to read on my own. After I had been tucked in at night, I continued to read, until my eyes no longer stayed open. When I started getting an allowance, I spent most of it at B Dalton or Waldenbooks. After I started college, my reading habits began to change when reading to learn left little time to read for pleasure, but I still found time to lose myself in the wonderful world of words.

When I became a mom myself, I began the same routine my mom had established years before. However, after a day wrangling kids, my reading routine generally stopped after they were tucked in for the night. At some point, I realized that I had lost control of my reading list. I allowed each child to select their bedtime story (though I sometimes claimed veto power, such as the 27th time my daughter wanted to hear Wendell) but rarely read anything of my choosing. I longed for the day I would again choose what I read.

Then I began to spend much of my after-school hours in the car. I discovered that waiting for children to finish activities (especially those didn’t last long enough to make it worth driving home and returning) could become prime reading time, even though this meant I had to adjust to a new pattern – putting a book down unfinished to come back to at a later date and time.

Today I read both to learn and for pleasure. I’ll admit that I often choose kids’ books over those written for adults. To be honest, I find they sometimes have more substance and truth than their grown-up counterparts.

As a writer, I have many writer friends and acquaintances. Some have written books and I have been lucky enough to receive advance copies to review. In addition, I have an account on Netgalley, which also provides me the opportunity to read and review books before they are released. Some of these books I have reviewed on this blog. Other books I have heard about and obtained in the same way as most people – personal recommendations and ads, through my local library and bookstores.

In 2020, my reading was an eclectic mix. In addition to the books I read to review, reading books has also been part of the research for the books I am writing. Some of these were for background and may include information that will work its way into my own books, while others are necessary market research. And of course I’ve also read some books just for the fun of it.

An Apple for Dapple by Leah Peterson

Too Sticky! Sensory Issues With Autism by Jen Malia

Now Hear This; Harper Soars With Her Magic Ears  by Valli and Harper Gideons

The Story of Norman Mineta, a Boy Imprisoned in a Japanese American Internment Camp During World War II by Andrea Warren

Eclipse Chaser: Science in the Moon’s Shadow by Ilima Loomis

Dissenter on the Bench: Ruth Bader Ginsburg’s Life and Work by Victoria Ortiz

I Dissent: Ruth Bader Ginsburg Made Her Mark by Debbie Levy

Nevertheless, We Persisted : 48 Voices of Defiance, Strength, and Courage

Becoming Dr. Seuss: Theodor Geisel and the Making of an American Imagination by Brian Jay Jones

Becoming Queen Victoria : The Tragic Death of Princess Charlotte and the Unexpected Rise Of Britain’s Greatest Monarch  by Kate Williams

The Last Tudor by Phillipa Gregory

The Extraordinary Life of AA Milne by Nadia Cohen

Good Girls Revolt: How the Women of Newsweek Sued their Bosses and Changed the Workplace by Lynn Povich

Let Them Be Themselves by Lee Bennett Hopkins

The Dutch House by Ann Patchett

Right now, my TBR (to be read) pile is substantial. If I were to make a New Year’s Resolution, it would be to read my way through much of it; my list for this month alone includes four that were recently published or are soon to be released. I’ll keep you posted…